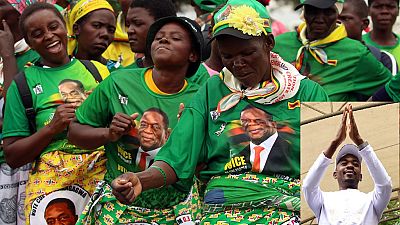 Zimbabweans have taken to social media to challenge the women’s league of the ruling ZANU-PF party which on Friday endorsed president Emmerson Mnangagwa as their sole candidate for the 2023 presidential elections.

The Women’s League, which last year endorsed ex-president Robert Mugabe as their prefered candidate for the 2018 presidential candidates, has been described as a rubber stump arm of the party.

The women also supported a proposal to raise the age limit for presidential candidates, a move that is seen to be targeting opposition leader Nelson Chamisa.

We support the resolution made by war vets, their proposal to say that age limit be set on eligibility to presidential candidates.

The veterans faction in the ruling party last week, called for the amendment of the constitution to raise the age limit for presidential candidates from 40 to 52.

“We support the resolution made by war vets, their proposal to say that age limit be set on eligibility to presidential candidates,” she said.

Nelson Chamisa is 40, and would be ineligible to contest the 2023 elections, if the constitution is amended to that effect.

ZANU-PF enjoys a parliamentary majority, secured in the July 30 elections.

Several Zimbabweans called out the women’s league for targeting Chamisa, rather than lobbying the party to field a female presidential candidate.

Most people in Zanu PF lack ambition and foresight that’s why the women’s league supports the idea of Presidential age limit increase from 40 to 52 years. Instead of women fighting for one of their own to rise into the Presidium they are supporting mediocrity.

Zanu PF Youth League is campaigning for young people to be banned from standing in presidential elections. If MDC chose a woman leader, Zanu PF Women’s League will campaign for all women to be banned from contesting https://t.co/hwL4rIbfut