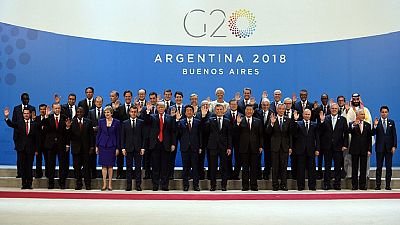 Only one African country is in the Group of 20 (G20) nations, South Africa. Its president Cyril Ramaphosa is currently attending the summit being held in the Argentine capital, Buenos Aires (November 30 – December 1).

Ramaphosa is joined by three other Africans who are at the summit in different capacities. Rwandan president Paul Kagame is also attending but in his capacity as current President of the African Union, AU.

The other African is a representative of the A.U’s New Partnership for Economic Development (NEPAD) program. In 2017 NEPAD was represented by Senegal President Macky Sall.

The last African is Ethiopia’s Tedros Adhanom Ghebreyesus – the WHO Director-General. The head of the global health outfit was also present in Hamburg as was the United Nations (U.N.) secretary-general, Antonio Guterres.

The G20 summit website said: “Countries which chair key regional groups – such as the African Union (AU), the Association for Southeast Asian Nations (ASEAN) and the New Partnership for Africa’s Development (NEPAD) – are generally invited to the summit.

“This year these regional groups will be represented by Rwanda, Singapore and Senegal, respectively. The Caribbean Community (CARICOM) has also been invited by Argentina for this year’s G20 and is represented by Jamaica.”

Other partners aside the UN and WHO are: Development Bank of Latin America (CAF), Caribbean Community (CARICOM), Financial Stability Board (FSB) and the Inter-American Development Bank (IDB).