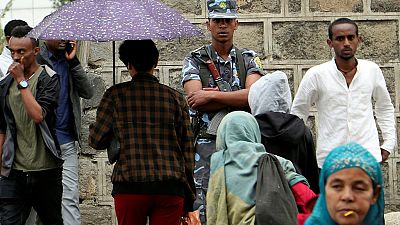 Ethiopians continue to react positively to a recent government crackdown on human rights abuses and the corruption by former officials of the intelligence agencies and the military’s business conglomerate respectively.

Over the last week over 60 officials have been arrested. The initial news of arrests was made by attorney general Tsegaye Berhanu who said investigations of five-months had led to the arrests.

Erstwhile spy chief and his deputy have since been arrested over rights abuses under their watch. Head of the army’s Metals and Engineering Corporation, MetEC, Kinfe Dangnew, was also picked as he attempted to flee to Sudan.

A resident of Addis Ababa, Gegeyehu Welelelign, said of the the operation: “There are many people in this country who have nothing to eat, and there are problems with housing and accommodation.

“Yet, at the heart of all this, we have corrupt officials who have bought ships and personal planes. This is probably the biggest corruption case in the world. I am deeply saddened, but it is a very good thing that the perpetrators have been apprehended.”

Human rights groups, the opposition and activists generally welcomed the detentions. An opposition politician rejects that that Prime Minister Abiy’s actions could lead to internal conflicts.

“The idea of a coup d‘état or any other conflict in the country is very far-fetched because this change has been made by the people and is supported by the Ethiopian people,” Birhanemeskel Abebe Segni said.

Prime Minister Abiy in his first comments since the crackdown said there was not going to be a retreat because Ethiopia needed to get rid of criminals who perpetrated looting of state coffers and gross rights abuses.