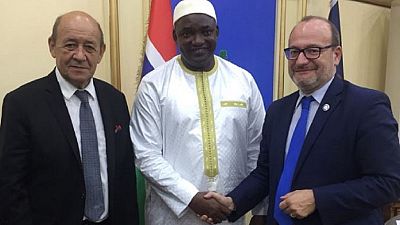 In a bid to secure its interests in West Africa, France on Monday gave the Gambia aid worth $34 million, packaging it as support to the ongoing democratic transition.

Visiting French Foreign Minister Jean-Yves Le Drian explained that it was important to ‘consolidate democracy and stability in Gambia’.

“What counts is France’s support for a democratic transition without any hidden pretenses because there was a dictatorship here that was overturned by the ballot box,” said Le Drian, whose visit to Banjul is the first for a senior French official since 1943.

We are friends and partners.

The aid provided by France comprises 5 million euros for budgetary support, 20 million for drinking water projects and 5 million for agriculture.

Gambia, a product of British and French colonial rivalry in the 19th century, won independence from Britain in 1965.

The tourist haven and groundnut producer is surrounded by francophone Senegal.

ALSO READ: Why Africa’s ‘smiling coast’ is officially referred to as ‘The’ Gambia

Both France and Britain are working to consolidate their global influence through the associations that bring together their former colonies.

Under President Emmanuel Macron, France is attempting to broaden its economic influence in Africa to anglophone regions.

While Gambia’s president Adama Barrow was offered observer status to the Francophonie in October, the head of its equivalent the Commonwealth visited the West African nation last week.

“We are friends and partners, and once again we are both members of the Commonwealth family of nations,” the prince said at a ceremony in Banjul’s McCarthy Square, hosted by President Barrow.

The Gambia is also important to France for security reasons. Paris has major economic interests in Senegal and wants to ensure a rebel movement in the southern Casamance area, separated from the more affluent north by Gambia, does not flare up after Jammeh broke ties with Dakar and destabilised the area.

French firms including Bollore and energy group Total are among those vying for contracts in Gambia.

Beyond Gambia, into C.A.R.

France, which intervened in its former colony, the Central African Republic in 2013, is also worried about the increasing role played by Russia in pacifying the restive country.

Le Drian on Friday committed some 24 million euros in aid and the delivery of 1,400 assault rifles to local authorities, but warned that CAR could not become a playground for world powers.

“Any manipulation of opportunist powers would be inept and unworthy. Let us give our full support to the African Union to preserve all chances for a quick and peaceful resolution of the crisis,” she said.