BBC's biggest bureau outside the UK is in Africa – Nairobi, Kenya 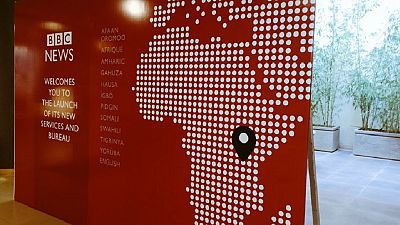 The British Broadcasting Corporation, BBC, on Monday opened its new offices in Kenya. What is officially known as the East Africa bureau is the BBC’s biggest bureau outside of its main offices in the United Kingdom.

The BBC says close to 300 of its 600 journalists working across the continent will be based in the facility located in the Kenyan capital Nairobi.

East African broadcasts to be ‘cooked’ from the studios include as they put it ‘well-established’ Somali, Swahili and English services. The recently launched Afaan Oromo, Tigrinya and Amharic services are also to operate from the bureau.

We are celebrating the African journalists and programme makers here today who will carry the torch of BBC professionalism, accuracy and impartiality into the future.

“The BBC World Service has earned a reputation across the world for impartial and independent journalism over many years.

“We are celebrating the African journalists and programme makers here today who will carry the torch of BBC professionalism, accuracy and impartiality into the future,” Rachael Akidi Okwir, Head of East Africa Languages for the BBC World Service, said.

Kenya’s deputy president, Willian Ruto, joined top guns from BBC’s headquarters and its correspondents across Africa, associates and well wishers for the official launch which took place amid a mix of technology and bright BBC colours.

During the launch of the BBC News Regional Headquarters, Nairobi County. #MeetBBCEastAfrica pic.twitter.com/6i9IZg29o0

The BBC also has offices in Nigeria from where it operates the Pidgin, Yoruba and Igbo services. They were launched along with the three East African languages above mentioned.

What is in the East Africa bureau?

The BBC World Service now delivers a total of 12 African languages, plus English.

The new investment is part of the largest expansion of the BBC World Service since the 1940s, funded by the UK government.

How long has BBC been operating in East Africa?

Since the start of the BBC broadcasts to East Africa in Kiswahili and Somali in 1957, audiences in the region have relied on the BBC to bring impartial news and information – and to take news about the region to the rest of the world.

With the opening of its Nairobi bureau in 1998, BBC World Service became the first international broadcaster to establish a news production bureau in Kenya.

The Nairobi bureau is scheduled to be the production hub of the a series of new programs to be produced by the African service.

Kenya to get $10m investment in BBC expansion https://t.co/7PDDX0ypCt

“Today marks another significant investment by the BBC in the future of African journalism and I’m delighted to be in Nairobi to open our largest news bureau in the world outside the UK.

“Earlier this year we opened another major hub in Lagos, we launched six new language services across the continent and expanded our francophone services. Our commitment to Africa is clear and our most important investment will be in training the next generation of African reporters and producers to world-class standards.”

About the BBC massive expansion

As part of its biggest expansion since the 1940s. In all, the BBC is introducing 11 new language services.

The #BBC will launch 11 new languages, including six African languages from its 2 most populous countries. https://t.co/Cl3q4gLnsH pic.twitter.com/1T2yKaJ4Ce