Second migrant caravan heads to the US

Thousands of Central American migrants are marching towards the United States in their quest for asylum.

The migrants have been undertaking a gruelling journey through a part of Mexico.

This group of migrants has been travelling mostly on foot for much of last week. On Sunday, they stopped over at the town of Arriaga where a temporary shelter has been set up by local authorities to provide medical support and food.

The few of us who are on the road we haven't suffered, they've (Mexicans) always helped us.

“Thanks to God, it has gone well. We’ve always been helped, the medics are nice, they’ve always given us a hand. The few of us who are on the road we haven’t suffered, they’ve (Mexicans) always helped us.” said Bernadina Hernandez a Honduran mother in the caravan.

Meanwhile, Donald Trump continues to rail against the caravan, saying the migrants will not enter the United States.

Nevertheless, other caravans continue forming in Central America as people flee poverty and violence afflicting three of the most dangerous countries in the hemisphere: Guatemala, Honduras and El Salvador. 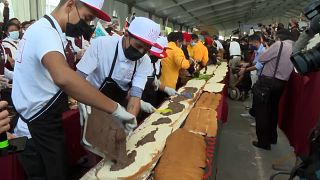