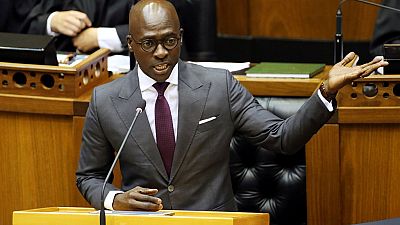 Calls for the resignation of South Africa’s finance minister, Malusi Gigaba have intensified following the recommendation by the country’s public protector that he is disciplined for lying under oath.

This is the latest setback for 47-year-old Gigaba, who said on Sunday that he had faced blackmail threats over a private sex video that was leaked after he said his phone was hacked.

A South African court ruled last December that Gigaba had violated the constitution when he denied having ever approved an application by the Oppenheimers to operate an immigration service for wealthy VIPs at Johannesburg’s main airport.

Nicky Oppenheimer, former chairman of diamond miner De Beers and one of South Africa’s wealthiest people, told a parliamentary committee this week that Gigaba had initially approved his family’s plan to open a private terminal at OR Tambo airport in 2016.

On Wednesday Public Protector Busisiwe Mkhwebane directed Ramaphosa to discipline Gigaba and to inform her of the action he had taken within 20 days.

“The minister has committed a breach of the constitution,” Mkhwebane told a news conference.

Gigaba was finance minister between March 2017 and February 2018 under scandal-plagued former president Jacob Zuma. He was moved back to the home affairs ministry by President Cyril Ramaphosa in a cabinet reshuffle in February.

Opposition party, Democratic Allinace (DA), which filed the complaint against Gigaba, says the minister’s poistion is no longer tenable.

“The DA has repeatedly called for constitutional delinquent Gigaba to be sacked, yet inexplicably he has remained a fixture in the cabinets of both Jacob Zuma and Cyril Ramaphosa,” the party said in a statement.

Gigaba’s spokesman did not answer his phone when called by Reuters on Wednesday.