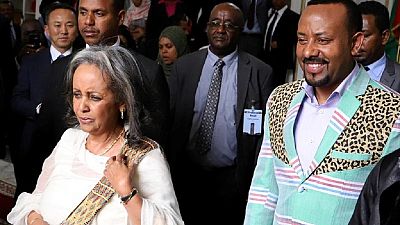 Ethiopia’s appointment of Sahle-Work Zewde as president has attracted a lot of praise on the continent and beyond.

The world of diplomacy, where Zewde has served over decades, have also extended congratulations to the new president and the Ethiopian government.

She is the latest high-profile woman appointed into government. Her appointment comes barely a week after Prime Minister Abiy Ahmed names a cabinet with as many men as women – a historic first.

The United Nations where she served over the last decade had its leader, Secretary-General Antonion Gutteres commenting as did the African Union and the European Union.

Zewde took her oath of office in front of a joint house of the legislature.S he replaced Mulatu Teshome who had been in the role since 2013. Below are a number of high-profile reactions.

Congratulations to Sahle-Work Zewde & to Ethiopians, on your first woman president & new cabinet in which women ministers head key departments. The African continent is leading the way in showcasing that women’s engagement and leadership are crucial to lasting peace. #SCR1325

“Congratulations to President Sahle-Work Zewde on being elected the first female President of Ethiopia – a strong symbol of growing female empowerment in Africa.” – PM Theresa_May

“The Chairperson of the Commission of the African Union, Moussa Faki Mahamat, welcomes the election, today, of Madam Sahle-Work Zewde as the new President of the Federal Democratic Republic of Ethiopia by the Ethiopian parliament.

“This election is a landmark in many respects. It is the first time in Ethiopia’s long and proud history that a woman is assuming this elected high office. Coming after the formation of a gender parity Cabinet, it marks a new milestone in Ethiopia’s trajectory towards women’s empowerment and effective participation in political decision-making.

“The confidence bestowed upon Madam Zewde is a source of pride not only for Ethiopia, but also for the continent as a whole,” AU chairperson wrote in a statement.

1/2 Congratulations to Ambassador Sahelwork Zewde on her selection as Ethiopia’s first woman President. We welcome her appointment not because of her gender but in recognition of her many years of experience and leadership in public service. pic.twitter.com/npG4tEdl1F

2/2 No society succeeds by excluding people from participation. We see the Ethiopian government focus on including women in leadership roles as a strong signal of commitment to build an inclusive political system where leaders attain their positions based on their ability to lead https://t.co/p3TSMxt4rK

“The appointment of Ms Sahle-Work Zewde as President of Ethiopia is yet another sign of Ethiopia’s path towards reform and internal cohesion.

“Ms Sahle-Work Zewde brings with her strong experience and an internationally renowned stature as a highly accomplished diplomat, along with her commitment to peace and democracy.

“Ms Sahle-Work Zewde’s appointment and Prime Minister Abiy’s recent nomination of a cabinet with gender parity with two strong women leaders to key positions, Aisha Mohammed as Minister of Defense and Muferiat Kamil in the new position of Minister of Peace, sends a strong signal about the Ethiopian government’s commitment to advance women’s empowerment.

“The EU is committed to continue supporting Ethiopia in its reform endeavours.”