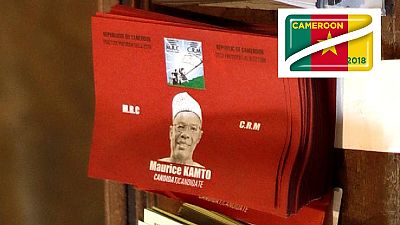 All that has changed in a matter of weeks. The main opposition tag at least per media reports and post-vote incidences is Kamto, leader of the Cameroon Renaissance Movement, CRM.

The lawyer and former ministerial appointee of incumbent Paul Biya has thrust himself to the forefront of Cameroonian politics with a bit of controversy, legal mastery and strong presence – on social media and conventional media.

He entered a belated political alliance with a fellow lawyer, Akere Muna, to join forces to wrestle power from Biya, who has been in power for over three and half decades. The election body, ELECAM, had cleared nine aspirants in total.

Political watchers said the immediate impact of the Kamto-Muna coalition could not be ascertained until after the elections. The election body, ELECAM, refused to remove Muna’s ballot papers saying it was too late in the day to do so.

The controversy around unofficial victory claim

Barely twenty-four hours after the vote and even before provisional results could be released, Kamto called a press conference and claimed he had won the vote with a clear majority.

The ruling CPDM and the government slammed the move. Information Minister Issa Tchiroma Bakary, tagged Kamto as irresponsible for what he said was an illegal declaration.

Team Kamto through a spokesman fired back stressing that he had claimed victory and not declared himself winner as government was alleging.

The Kamto camp were again out in full force demanding a probe into circumstances surrounding the emergence of fake election observers passed as staff of anti-corruption group, Transparency International, TI.

TI issued a release falsifying a report by state broadcaster, CRTV, that observers from the group had okayed the conduct of the polls. Sveral opposition parties joined calls for a probe.

Government cancelled a planned press conference to respond to the ghost reporters. Local media reported that Minister Tchiroma Bakary had been barred by the presidency over the issue, Africanews could not confirm the veracity of that report.

Then came the unconfirmed and supposedly leaked 71% victory of Biya, Kamto jumped in categorically rubbishing it.

When a planned press conference was blocked by security forces in Yaounde, he turned to Facebook to address his supporters.

Kamto had meanwhile, joined some 17 others – individuals and parties – in depositing papers of a poll petition with the Constitutional Council. His party was seeking cancellations in certain areas.

When it was time for the poll petition hearing to begin, Kamto, who was part of his party’s legal team made a quit demand on the part of members of the Constitutional Council.

Citing reasons that six of the members were allies of the ruling CPDM party, Kamto asked that they recuse themselves from the hearing or better still that the petition be heard by another judicial body.

The application was rejected by head of the Council, Clement Atangana, who has serially been accused of being an ally of Paul Biya.

Meanwhile, after sixteen of eighteen petitions were dismissed Kamto’s legal team are taking turns to prove to the council as at October 17, the need for the process to be totally scrapped.

Kamto’s lawyer says funds were made available 3 days to campaign in cash and not bank transfer. Kamto’s lawyers call on Constitutional council members to examine their consciences and render judgement that will protect their legacy.

CRM lawyers say Maurice Kamto wrote to ELECAM to have details on the format and location of posters to no avail, state-owned CRTV said in a series of tweets.