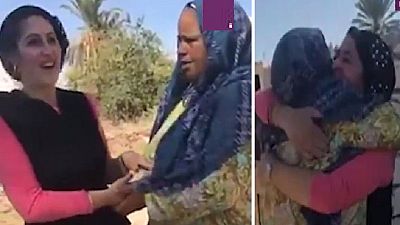 The Al Arabiya news channel has shared the story of two childhood best friends who were recently reunited in Tunisia. Zeinat, a Jewish lost contact with Rabee’a, a Muslim for over 40 years.

She decided to return to the neighbourhood to look for her long lost friend. Al Arabiya English’s Twitter handle shared a video showing the women meeting outside the home of the Rabee’a.

It turned out to be an emotional reunion in the company of other acquaintances as Zeinat relates how she longed to see Rabee’a again, going as far as looking for her through Facebook.

A transcript of their interaction was as follows:

Do you remember me?
Rabee’a: Najwa, guessed wrongly.
Zeinat: I’m the jewish girls you used to play with back when we were children.
Rabee’a: Zeinat! (both get into a long embrace to the point of shedding tears)
Zeinat: I told them I know a woman that I’d never forget. I’d love to see her.
Rabee’a: Subhaanal Laah, mentions words of praise to Allah
Zeinat: I tried to reach you on Facebook, but I couldn’t find you.
Rabee’a: I always remember you.
Zeinat: talking to the cameras I haven’t seen her since 1978.
Rabee’a: Even for much longer.

Al Arabiya’s video of the reunion