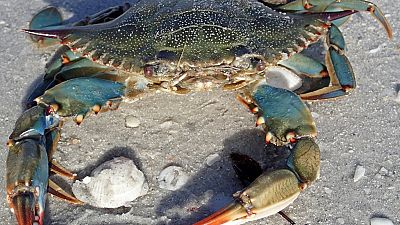 In Tunisia, fishermen are now cashing in on the crabs which they nicknamed after the terrifying militants of the Daesh group.

Once a native of the Red Sea, the blue crab first showed up in the Gulf of Gabes off Tunisia’s coast in 2014.

“When we started to find him, we found a few of them getting stuck in the nets. People (fishermen) were surprised when they saw them. But then, when they invaded the sea, they became “Daesh” for real, a real curse. This species prevented us from fishing. The fish trapped in our nets, they ate them… damaged them,” said fisherman Jamel Ben Jemaa Zayoud.

For those making their livelihoods from the sea, the transformation has been stark. In the first seven months of this year, Tunisia produced 1,450 tons of blue crab worth around 3.5 million US dollars, according to the ministry of agriculture.

“All the parties involved in the sector, research, profession, administration have thought of putting in place a national plan to, in fact, exploit, promote and market this crab unknown by Tunisian fishermen,” emphasized Marouene Bedoui a researcher at INSTM.

“We didn’t have a market, we didn’t have the proper marketing techniques and we didn’t have any knowledge of how to market or consume this animal. There were difficulties in marketing it on the Tunisian market because the Tunisian consumer did not know it. The fisherman therefore avoided fishing it. But when investors came and the administrations of the Ministry of Agriculture and Maritime Fisheries began to move as well as all the administrations concerned, we began to explore foreign markets in this field,” Karim Hammami, Deputy Director of Tucrab company said.

The fishermen are now planning to limit themselves in order not to deplete crab stocks too much.

Blue crabs actually help manage the populations of the animals and fish they eat, so during periods of overfishing, the loss of blue crabs has negative effects on the ecosystem where the crabs once hunted and ate.