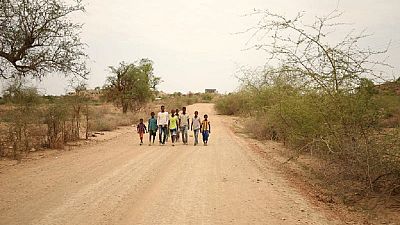 Women and children constitute 90% of Eritreans crossing over into Ethiopia following the reopening of border crossing between the two countries.

According to ACAPS, a Geneva-based group tracking over 40 crises around the world, the number of refugees continues to rise sharply.

On the Ethiopian New Year – September 11, 2018 – border crossings were jointly opened by Ethiopian Prime Minister Abiy Ahmed and Eritrean President Isaias Afwerki. It was the most significant step since both leaders signed a peace deal on July 8, 2018 in Asmara.

90% of the new arrivals are women and children, in contrast with the current population of the Eritrean camps in Tigray, where young men were the majority. Main humanitarian needs are shelter and healthcare.

Under the headline ‘Influx From Eritrea,’ in their crisis analysis report on Ethiopia dated October 9, 2018; ACAPS noted: “There are no border controls at these crossing points and the daily arrival rate has increased from an average of 50 people/day to 180 people/day as of 20 September.

“Between 21 September and 2 October, it increased again to 390 people/day. Since the border has been opened, 6,779 refugees from Eritrea were registered at the Endabaguna Reception Centre, with a further 2,725 others at the border points awaiting relocation to Endabaguna as of 2 October.

“90% of the new arrivals are women and children, in contrast with the current population of the Eritrean camps in Tigray, where young men were the majority. Main humanitarian needs are shelter and healthcare,” the added.

ACAP’s position has been made by other partner agencies like the United Nations Office for the Coordination of Humanitarian Affairs (OCHA), UNHCR, the EU’s humanitarian body and Crisis Watch.

Until the peace deal, borders were closed and the areas heavily militarized with armies of both countries on a war footing. Some young male Eritreans, however, managed to sneak into Ethiopia as they escaped political and economic conditions back home.

Reports earlier this week also confirmed that although not official intra-regional movement in the country was now going on easily without a person having to carry a pass.

The unofficial ease of travel restrictions within Eritrea is collaborated by several sources. Natberh https://t.co/Ot91Lg6AFt