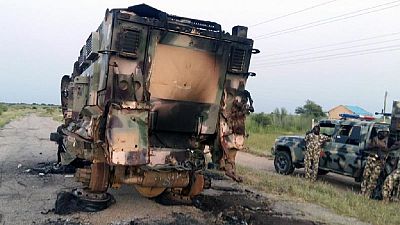 The Nigerian Army has confirmed the death of seven soldiers in an attack by Boko Haram terrorists, BHTs, on a military base in northeastern Borno State.

The Army added that 16 other soldiers were wounded in the attack that took place in Metele. “Gallant troops of 157 Battalion decisively engaged BHTs who attempted to overrun their position near Kangarwa in Borno State.

“The sustained superior firepower of the troops led to the neutralization of 76 BHTs,” the statement of Wednesday October 10 and posted on Twitter said.

The sustained superior firepower of the troops led to the neutralization of 76 Boko Haram terrorists.

It continued that: “The COAS Lt Gen TY Buratai has commiserated with the families of the deceased and directed that the wounded be given adequate medical attention.”

Daring attacks by the insurgents have been frequent in the past weeks with the army recording successes by way of repelling them. The army is largely deployed in Borno State, where the group’s activities are restricted.

The government has stressed that despite a fightback, it was winning the war against the insurgents who continue to attack army positions and internally displaced camps.

The Boko Haram insurgency was a key plank of the promises that brought Muhammadu Buhari into office. The army has since 2015 pushed the group from territories it “ruled.”

The army says the group is now restricted to the Sambisa Forest from where they have planned attacks. It is believed that there are thousands of captives being held in the forest including a number of the famed Chibok Girls.

Their activities stretch beyond Nigeria into the wider Lake Chad region. Thousands have died in Nigeria and millions displaced on the back of their attacks which has spread across Cameroon’s Far North, parts of Chad and Niger.