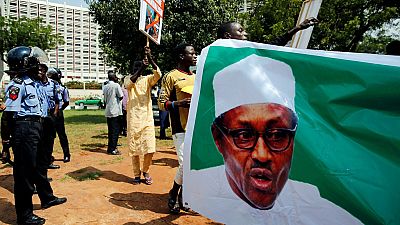 Nigeria’s ruling All Progressives Party, APC, on Saturday affirmed the candidature of President Muhammadu Buhari ahead of February 2019 elections.

The septuagenarian will be contesting for a second and final term in charge of Africa’s most populous and its largest economy. Buhari stood uncontested for the ticket.

At the end of polling in what the APC termed direct primaries, the president polled over 14.8 million votes at the special congress held at the Eagle Square in Abuja.

“It is with a deep sense of humility that I accept the nomination of our great party, the All Progressives Congress, to be its candidate and flagbearer in the 2019 Presidential election.

“I thank you all for your support and guidance, and for staying committed to the Change Agenda,” Buhari said as part of his acceptance speech.

Even as the APC was affirming Buhari in Abuja, the main opposition Peoples Democratic Party, PDP, was also holding its national congress in the southern Rivers State capital of Port Harcourt.

Buhari came to power in 2015 defeating incumbent Goodluck Jonathan as he attempted to secure a final term. Buhari has mocked the PDP aspirants as persons who quit APC just because of presidential ambitions.

The 2019 elections are seen as a litmus test for Nigeria after the 2015 process was widely hailed as the best in Nigeria’s recent history. The final gubernatorial elections in Osun State were tagged undemocratic by observers and the international community.

But Buhari in his 58th Independence Day address on October 1 stressed that he was committed to ensuring that the elections body, INEC, will conduct an independent and free, fair process.