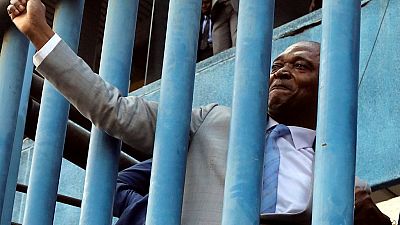 Lawyers of a presidential candidate in Democratic Republic of Congo are lobbying the European Union to lift sanctions against their client, arguing that the regional body would be interfering in the election if it acts otherwise.

The EU imposed sanctions on Ramazani and 15 others for what it said were rights violations and interference in the election process, and is due to vote on whether to renew those sanctions on Dec. 12.

By maintaining restrictive measures against Mr. Ramazani Shadary, a candidate in the presidential election, the Council has permitted itself to take a position in the internal democratic debate in Congo.

DRC’s presidential election is on Dec. 23.

In a series of letter to the Council of the European Union between Sept. 10-28 seen by Reuters, lawyers representing 15 of the officials under sanctions said Kabila’s decision in August not seek a third term had rendered the sanctions moot and called them “blatant interference” in the electoral process.

“By maintaining restrictive measures against Mr. Ramazani Shadary, a candidate in the presidential election, the Council has permitted itself to take a position in the internal democratic debate in Congo,” the lawyers wrote.

Renewal requires a unanimous vote from the EU member states, some of whom have been reluctant in the past to impose sanctions. Congo’s government says the sanctions are unjustified and illegal — a position backed by the African Union.

One of the lawyers, Thierry Bontinck, told Reuters they had filed a challenge on behalf of the 15 officials to the Luxembourg-based General Court, Europe’s second highest.

Bontinck said he had since exchanged memos with the court, but declined to elaborate.

An EU official speaking on condition of anonymity said in response that the Council could not comment on correspondences with individuals but it always carefully considers objections to sanctions.

Kabila’s decision not to run in December has cleared the way for what could be Congo’s first democratic transition after decades marked by autocratic rule, coups and rebellions.

His opponents, however, doubt the vote will be free and fair, particularly after several leading opposition candidates were barred from running.