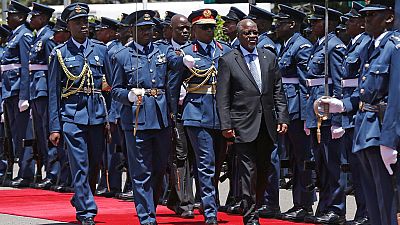 Tanzania’s president, John Magufuli has explained that he did not go to New York for the United Nations General Assembly (UNGA), in order to save money.

Magufuli, who rarely travels out of the country, thanked the foreign minister, Dr. Augustine Mahiga, for always representing him well in international fora.

‘‘He has just arrived from the UN summit where he represented me, saving the government money. This is because sending a minister and his assistant is less expensive than sending the president and his delegation,’‘ Magufuli said.

He has just arrived from the UN summit where he represented me, saving the government money.

Since becoming president in 2015, Magufuli has only travelled to Uganda (twice), Rwanda, Kenya and Ethiopia.

Magufuli, who has championed austerity measures during his presidency, has cut government spending by imposing measures such as restrictions on foreign travel for government officials and the removal of “ghost workers” from the state payroll.

Uganda’s president Yoweri Museveni also snubbed the UNGA last week arguing that the 15 minutes address that leaders are given during the General Debate could not justify the costs of a typical presidential entourage.

“Cabinet took decision three months ago that we need to cut costs and this includes limiting the president’s movements abroad. When the President moves, he needs a bigger delegation,” State Minister for Foreign Affairs, Okello Oryem told journalists.

List: African presidents who have spoken at the 73rd UNGA https://t.co/xeeq0bGcaS