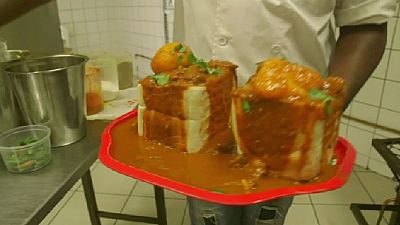 South Africa is often referred to as a rainbow nation. The country has rich cultural heritage and with that comes diverse foods.

In the coastal city of Durban home to one of the largest Indian communities, you will find the unique curry called bunny chow.

The bunny chow is a fusion of bread and curry with its origins.

“After we add the mutton then we let it boil for a while, then we add a little bit of oil and some potato when it’s starting to get softer, so that it will be nice and a bit thick,” says chef Shame Dinala

The unique dish has been getting global acclaim – with the “bunny chow” appearing in restaurants in the United Kingdom, United States, Australia and even popping up – to a small degree – in India.

While its history is not confirmed, it’s believed that when the indentured labourers arrived from India to work in the South Africa’s sugar cane plantations, they used the bread ‘bowl’ of the Bunny Chow as a portable container.