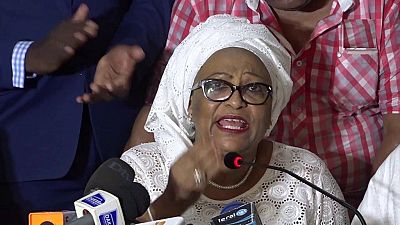 <p>The Senegalese capital of Dakar has a new mayor in the person of Soham El Wardini who records indicate is the first woman post-independence to hold the post.</p> <p>Until her election last Saturday, September 29, she was the deputy mayor to embattled Khalifa Sall – who has been imprisoned since March 2017 over corruption charges, despite repeatedly claiming it is a political witch-hunt.</p> <p>Wardini polled 64 votes against 13 and 11 for Moussa Sy and Banda Diop respectively. “I am proud to be the first female mayor of the Senegalese capital,” she stressed after results of the election to replace Sall were announced. </p> <p>She went on to reiterate her support for Khalifa Sall and saying that she still considered him as being the mayor. “The teams will remain unchanged. We will finish the projects started. The key is to get back to work and stay united. I assure you that the fight continues,” she added to the joy of Sall faithful.</p> <p>Appointed deputy in 2014, she served in acting capacity over the period that Sall shuttled between jail and the courts. Incidentally until August 31st when Sall was officially stripped of his tenure she visited him in prison to take instructions on how to run Dakar.</p> <p>But she has a little over a year before the next municipal elections are held, when she can contest for her first official term in charge of one of Africa’s booming capitals. She has set sights on ensuring a clean capital under her tenure: “I do not want Dakar to be named one of the dirtiest cities in the world. It deserves all the sacrifices,“she declared after the polls.</p> <p>Brief about Soham El Wardini – Ex-Beauty pageant turned mayor</p> <p>She was born in 1953 in the town of Latmingué in the Kaolack region. Her father is of Lebanese origin whiles her mother is a full Senegalese.</p> <p>Soham El Wardini grew up along with ten other siblings in Latmingue. It was the death of her father, a peanut trader, that caused the family to migrate to Kaolack where she received much of her high school education, graduate studies and then became a teacher.</p> <p>Her political journey kick started in 1999 when she joined the Alliance of Forces of Progress (<span class="caps">AFP</span>) of former Socialist Prime Minister, Moustapha Niasse, who is the current leader of the National Assembly. </p> <p>Following the split of the party in 2012 between incumbent Macky Sall and Khalifa Sall, Wardini joined the Khalifa Sall faction rising through the ranks to become his deputy.</p> <p>Since its founding in 1857, Dakar has only had one pre-independence mayoress. The almost three million inhabitants of today are experiencing history because Wardini is the first first female mayor of the city since Senegal became an independent nation in 1960.</p>