CAF will not withdraw AFCON 2019 hosting rights from Cameroon: president 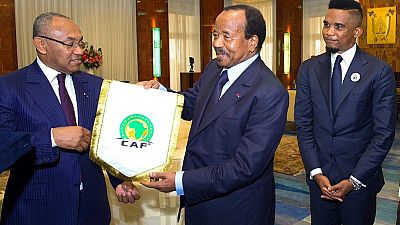 Confederation of African Football (CAF) President, Ahmad Ahmad has reassured Cameroon of its hosting rights for the 2019 African Cup of Nations finals.

Ahmad, who met Cameroon’s president Paul Biya on Tuesday said the continental football governing body has no alternative plans for tournament hosts despite persistent fears that the 24-team competition could be moved to Morocco.

‘‘CAF has no plans to withdraw the hosting right from Cameroon” Ahmad said after the meeting that was also attended by Cameroon’s football legend Samuel Eto’o.

CAF has no plans to withdraw the hosting right from Cameroon.

‘‘But if Cameroon evaluates earmarked projects and think she cannot host the competition now, let us know,’‘he added.

CAF on Saturday said it would not take a decision on Cameroon’s readiness to host the tournament until the October 7 election has been completed.

Biya has repeatedly said the country will be ready to host the continent’s biggest football tournament.

Like I said… Cameroon will be ready on the D-day.#CAN2019#AFCON2019#PaulBiya#Cameroun#Cameroon pic.twitter.com/xmyfjxDBLb