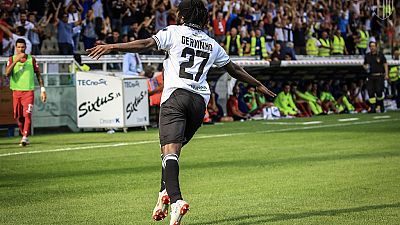 Ivorian international Yao Gervinho scored a sensational goal in his side Parma’s Serie A fixture against Cagliari. Parma won the fixture by two goals to zero.

The striker picked a clearance deep in his own half before racing across the pitch to fire a shot that went against the cross bar before nestling in the post. The club put together a count of touches leading to the goal, 11 touches in all.

The entire stadium could not hide their admiration for the effort that was reminiscent of a goal scored by former world footballer of the year and current Liebrian president George Weah.

Weah, at the time playing for AC Milan picked a ball in Milan’s penalty box before skipping past and holding off all opposing players eventually slotting home. His side won the fixture by four goals to one against Verona in 1996.

It was in August 2018 that Gervinho returned to the European topflight after two years in Asia. He last played in the Serie A with Roma having transferred to Rome after three years with English Premier league side, Arsenal. He joins on the final day of the Italian transfer window.