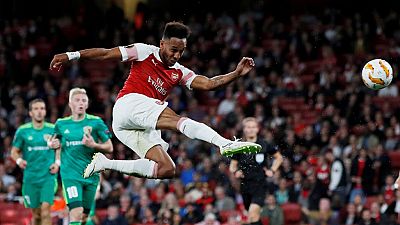 Aubameyang would strike again after half-time, while Arsenal’s other goals were scored by Danny Welbeck and Mesut Ozil in the 4-2 win.

The other English club side playing in this year’s Europa competition, Chelsea also got off to a winning start, thanks to a goal from Brazilian Willian in a 1-0 win over Greek side PAOK Salonika.

The victory was the London club’s first Europa league game since winning the competition in 2013.

Who surprised you? ?
Who looks set for a title charge? ?#UEL pic.twitter.com/rYoQOKJAXG