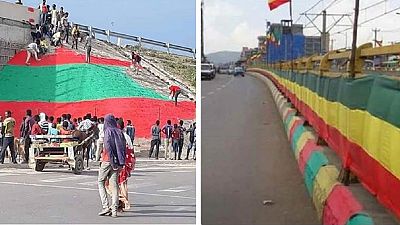 Ethiopia’s flag clashes which started this week continues to elicit reactions across the social board. As at Friday afternoon, movement in the capital Addis Ababa had been largely paralyzed amid heavy police deployment.

Prime Minister Abiy Ahmed chastised persons involved in a crisis that he says could easily be resolved through dialogue. The police chief has also waded in asking the parties to respect the laws of the country.

Ethiopia’s vibrant activists will not be left out of the ongoings. a cross-section of activists have slammed the tensions in the capital.

According to award-winning and persecuted journalist Eskineder Nega the issue was much ado about nothing and that in the end there were no winners in a useless face off.

Meanwhile, a key pro-democracy activist, Jawar Mohammed, has confirmed that police action had resulted in one death. He also reports an assault on a Reuters crew covering the event.

Federal Police must stop firing on people. They should be protecting them against attacks by the hooligans.

A series of tweets on reaction of activists to the crisis

Like I tweeted yesterday….all really empty threats….REBELS WITHOUT CAUSE are getting no where….this is absurd DRAMA that is outrageously being written by the blood of the innocent….WHO is responsible?…..

The presence of the POLICE in certain areas of ADDIS has increased visibly…… in FERENCAYthere are less number of ETHIOPIAN FLAGS on the main thoroughfare after local YOUTH voluntarily removed them to pre-empt provocation…..

What is wrong with us? We fought and defeated the enemies of democracy. It’s perplexing that now we’re fighting democracy, the very value that we died for. Why can’t we enjoy liberty by respecting the liberty of others, and why in the hell are we taking the law in our own hands?

That said, I reject any competition of symbols & any attempt to incite communal violence based on symbols. sending cars full of emotional youth into the city knowing conflict is inevitable is irresponsible, even if that might be a response for previous political events.

For the last 27 years, TPLF/EPRDF has been preaching tirelessly that OLF is a terrorist. They've also been preaching Amharas are Oromo's historical oppressors.
It is this generation that is now fighting one another on the streets of Addis Ababa. #WeShouldKnowBetter #Ethiopia

There is a segment of the Addis Ababa population that refuses to accept the extent of the greater country's diversity. Strongly condemn any attack on individuals waving a flag of their choice. Second report of violence against people waving Oromo resistance flags in barely a week

Institutional madness is the norm in this country and they back to it. Why should the federal police have to fire live bullets and tear gas to a large crowd coming to the city. Isn’t their role to protect them?

Update: The federal and the city Polices are safeguarding Menilik II Square using anti-riot vehicles. The youths from the Oromia region holding the OLF flag and residents of holding the Ethiopian flag are rallying is now on the streets. #Ethiopia #AddisAbeba https://t.co/AzgOooyz7w

Piassa, the road from Degol square to Menelik II square is blocked by riot police. Most shops are still closed but people moving around calmly.