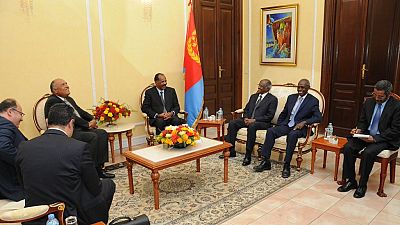 Eritrea and Egypt have held talks around the enhancement of bilateral ties amid a cooling of relations between nations across the Horn of Africa region.

Egypt’s Foreign Affairs Minister Sameh Shoukry was in the Eritrean capital Asmara on Thursday. He met with President Isaias Afwerki and delivered a message from President Abdel Fattah Al-Sisi.

Eritrean information minister disclosed that in a statement to the country’s news agency, Shoukry underlined the convergence of views of both leaders on vital regional issues.

“Enhanced cooperation between Egypt & Eritrea will thus “imbue additional vigour to recent positive developments in Horn of Africa”,” he said in a tweet.

Asmara has in the past few months hosted leaders from across the region following its peace deal with Ethiopia, which ended decades of hostilities between them.

Since Ethiopian Prime Minister Abiy Ahmed met with Afwerki on July 9 to sign the deal, Afwerki has gone on to host Somali president and South Sudanese presidents.

On September 11 (the Ethiopian New Year, 2011), the two leaders formally opened border crossings between the two countries allowing movement of persons and goods.

Thousands of soldiers deployed along the border are also to be withdrawn to ease tensions, Abiy told reporters in Addis Ababa. The troops are to be sent back into camps with Eritrea also doing same.