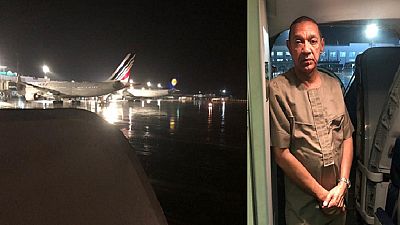 All flights to Nigeria’s main airport in the capital Abuja were stuck after a local airline overshot the runway at the Nnamdi Azikiwe International Airport.

A serving lawmaker, Senator Ben Murray-Bruce posted the development on Twitter stating that the holdup was because authorities had failed to get the right equipment to clear the runway.

He did not disclose the exact flight that had caused the situation but posted pictures of himself in the Dana flight and another of stranded flights on the tarmac.

“I am on a Dana Flight meant to leave Nnamdi Azikiwe Airport at 9PM but still stuck here because a plane overshot the runway and there is difficulty getting the right equipment to clear the runway. Both domestic and international flights are stuck. So much for the promised change!” his post read.

In February 2018, a similar incident happened when a plane overshot the runway and ended in a bush. The flight from Lagos to the city of Port Harcourt overshot the runway following which emergency response teams on ground were dispatched to the scene.

The operator in question, Dana Airlines, in a statement said all forty-four crew and passengers on board were safely rescued and blamed the incident on inclement weather.