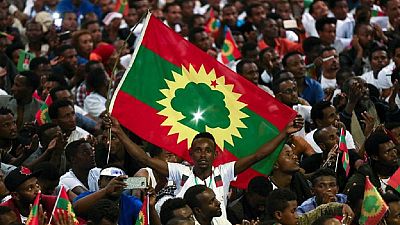 The Ethiopian capital Addis Ababa is in a tense mood due to a disagreement over the use of specific flags across the city, state and private news portals have reported.

The Addis Standard news portal said the standoff which has already led to scuffles and confrontations in the capital was between youth from the Oromia region and city dwellers.

“The confrontation is over the hoisting of flags symbolizing the Oromo resistance movements and painting of road pavements, roads, fences and other places with similar colors of red and green with a yellow at the center by the youth from Oromia and between city dwellers who want to prevent them.

Reacting to the incidents, Prime Minister Abiy Ahmed is quoted by the state-run Fana broadcasting corporate as cautioning against the use of violence in a case where dialogue was clearly the only way out.

Fana added that Abiy deplored what he said was an attempt to incite violence under the guise of a flag. The right of freedom of expression includes a flag as well, he is reported to have said, adding “we should not marginalize political parties coming from abroad.”

“As there will be no a single winner, we should cooperate each other by resolving our differences through dialogue,” Abiy stressed.

On his part, federal police chief Jamal Zeinu is also reported to have called for calm and stressed that his outfit will do all it takes to maintain peace and calm. He said whiles Oromia youth were within their means to wave any flag of their choice, it was not right to paint Addis Ababa in their preferred colours.

He also blamed young city dwellers who according to him had taken the law into their hands by taking down flags hoisted by the other party. He confirmed violent incidents like cars being smashed, attempts to burn a police station and other properties.

“The youngsters from Oromia are arriving in Addis Abeba to take part in a welcoming ceremony and an open air concert on Sep. 15th. The event is organized for members of a faction of the Oromo Liberation Front (OLF) led by Dawud Ibssa.

“The Eritrean based OLF recently reached an agreement with the Ethiopian government to renounce its armed struggle and return to Ethiopia to continue peaceful political struggle,” the Addis Standard report added.