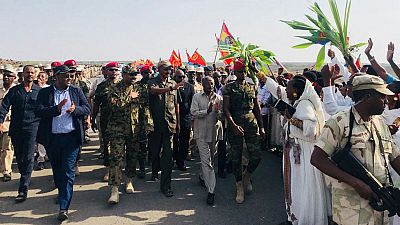 There was a lot of emotion and excitement as Ethiopia and Eritrea opened their common borders allowing the free movement of persons and goods after years of closure amid a political standoff.

Photos from the dual border crossing openings in the towns of Bure and Zalambeesa showed leaders of both countries surrounded by troops of both sides opening the borders. Ethiopian Prime Minister Abiy Ahmed chose military fatigues whiles Isaias Afwerki arrived in a brown short-sleeved political suit.

Ordinary Ethiopians and Eritreans will not be left out of the historic and momentous occasion as they thronged the venues to catch a glimpse of the moment that allowed them to freely associated with each other.

Tuesday’s event coincided with the Ethiopian New Year, 2011. It was also perhaps the most significant occurrence in renewed ties between the two nations since the two leaders signed a peace deal on July 9, 2018.

PM Abiy Ahmed and President Isaias Afwerki are visiting Bure Front along Ethio-Eritrea border to celebrate the New Year with members of the Ethiopian & Eritrean Defense Forces following the full normalization of the relations between the two countries. #Ethiopia #Eritrea pic.twitter.com/Z9C4QkNsPM

Road links between Ethiopia and Eritrea will be operational, opening the gate for cross border movement of people and goods. With fully normalization, our recent tragic history is coming to an end. #Ethiopia #Eritrea (2/2) pic.twitter.com/9BRYSeUlW1