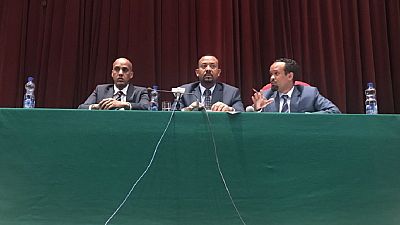 Ethiopia’s eastern Somali regional state has been a political hotbed in the past weeks with major developments unfolding in the wake of an army backed ouster of its long serving president Abdi Mohamoud Omar, popularly referred to as Abdi Illey.

He was charged in court on Wednesday over multiple charges including inciting to violence leading to mass displacement. He was arraigned before court along with six other officials of the regional government.

Incidentally, the new leader of the region as chosen by the leaders of the Ethiopian Somali Peoples Democratic Party (ESPDP) who met in Addis Ababa is an avowed critic of the former president. ESPDP is the region’s ruling party.

The new leader is Mustafa Omer – reputed as a human rights defender. He has since taken office with the firm promise to right the many wrongs committed over the last decade that Abdi Illey was in charge.

Omer is one with firm support of Addis Ababa, the federal government. Many watchers say that will be a spring in his step in an earnest bid to reposition the regional government ahead of polls slated for 2020.

HE PM Abiy Ahmed today met with community & religious leaders & representatives of the Ethio-Somali Region. The participants urged action on justice. The PM while appreciating their patience, he also underscored the primacy of tolerance, dialogue and the rule of law. #Ethiopia. pic.twitter.com/rxumdamTrY

When Abdi Illey was toppled, the region’s head of finance was handed the presidency in an acting capacity. The former leader was flown to Addis Ababa and reportedly remained under house arrest till recently charged.

On Monday (August 27), the state-run Fana broadcasting corporate reported his arrest over possession of arms but also inciting ethnic violence. This was after his parliamentary immunity was revoked by the regional parliament.

At a time he agreed to step down as president, Abdi Illey still held on to his post as leader of the ESPDP. During meetings of high ranking members in the capital, the party replaced him with Communications Minister, Ahmed Shide.

The Ogaden National Liberation Front (ONLF) have not been left out of the region’s politics. The have since early August called on the federal government to desist from intervening in regional politics, declared a unilateral ceasefire and have spoken on Abdi Illey’s arrest.

ONLF, who are said to be the worst affected by the activities of the Liyu police whiles maintaining their secession stance from Ethiopia are now more than ever beginning to engage in the region’s politics.

In a marked departure from the past, its leaders have met with Abdi Illey’s successor, Mustafa Omer, the front weeks back announced a political merger at an event in London, signs of its increasing will to engage politically.

A new, strong #coalition has been created by the #Ogaden National Liberation Front (ONLF) and Somali Regional Democratic Alliance (SRDA). The establishment of the #Somali Coalition for Freedom (SCF) was announced yesterday (18 August 2018) in a big meeting in London.

Calls for Illey to face justice for his crimes

Meanwhile, calls on the part of activists and human rights groups for Abdi Illey’s prosecution continue to mount. Human Rights Watch researcher called it the first step in seeking justice for the hundreds of thousands that suffered under the Illey regime.

His immunity from arrest lifted and being charged are further steps in this regard. Meanwhile, reports indicate that Somaliland had also arrested some regional officials who were attempting to flee – supposedly from justice.

The federal intervention in the region has been criticized in some quarters as a move by the center to control the region’s administration because of new found oil deposits.

Others have justified it stating that regional security continued to deteriorate with consequences stretching into adjoining Oromia region. The two regions share a long border that has often stoked inter-regional conflicts leading to deaths and displacement.

The new leader of the region has also hit the ground running with the sacking of the head of the Liyu police for his role in documented rights abuse.

Gen Abdirahman Laba-Go’lle was on Tuesday sacked by the Somali regional president and immediately replaced by Mohamed Abdi Mawsar.
Liyu Police have sierially been implicated in human rights abuses in the Somali and Oromia regions of Ethiopia by rights groups especially Human Rights Watch.

By 2008, the Liyu police had become a prominent counterinsurgency force recruited and led by then-regional security chief Abdi Mohammed Omar, known as “Abdi Illey.” Abdi Illey became the president of Somali Regional State in 2010, and the Liyu police continue to report to him.