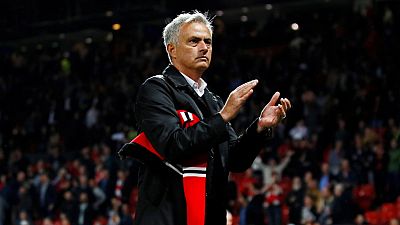 <p><strong>Manchester United manager, Jose Mourinho walked out of the news conference on Monday night, waving three fingers to emphasise the Premier League titles he has won and angrily demanding “respect, respect, respect” from the reporters.</strong></p> <p>The news conference followed the club’s humiliating loss to Tottenham at the Old Trafford, with Spurs goals coming from Lucas Moura and Harry Kane.</p> <p>United’s defensive weaknesses were exposed again, as the loss means United have lost two of their opening three games of the season and conceded six goals in the last two games.</p> <h2 style="font-size:16px;">All eyes on Mourinho</h2> <p>There was an odd scene at the close of the game as Mourinho spent almost a minute standing in front of the Stretford End, applauding the remaining home fans.</p> <p>The Portuguese manager struck a defiant tone in his post-match interview, highlighting the chants of support from the crowd.</p> <p>“We worked all week and from the tactical point of view we didn’t lose, but we lost the game,” said Mourinho who went on the attack against the media.</p> <p>“But all our fans don’t read papers, all our fans don’t watch television, all our fans are more intelligent than that – they answered in an absolutely amazing way.’‘</p> <p>Mourinho’s attak on the media follows consistent reports of a falllout out between him and the club’s chief executive Ed Woodward.</p> <p>Mourinho signed a contract extension in January to keep him at United until 2020 and former United defender Gary Neville believes he must be given the chance to turn the team’s fortunes around.</p> <p>“I accept these are different times and I accept the difficulties and challenges, but my honest view as I stand here now is that Ed Woodward gave him a contract last season … he should see that contract through to the end and do the job,’‘ he told Sky’s Monday Night Football.</p> <h2 style="font-size:16px;">Defensive headache</h2> <p>After the debacle of last week’s 3-2 defeat by Brighton, Mourinho made six changes and dropped both central defenders, Eric Bailly and Victor Lindelof.</p> <p>With first starts of the season for Antonio Valencia, Ander Herrera, Nemanja Matic and Jesse Lingard there was a stronger look about United.</p> <p>Mourinho opted for a three-man defence with the recalled English pair of Chris Smalling and Phil Jones surprisingly joined by Spanish midfielder Ander Herrera.</p> <style>.embed-container { position: relative; padding-bottom: 56.25%; height: 0; overflow: hidden; max-width: 100%; } .embed-container iframe, .embed-container object, .embed-container embed { position: absolute; top: 0; left: 0; width: 100%; height: 100%; }</style><div class='embed-container'><iframe src='https://www.youtube.com/embed/6AwQJM-9nP8' frameborder='0' allowfullscreen></iframe></div> <p>Mourinho had made clear throughout the close-season that he wanted a new central defender and his team have shown in the past nine days exactly why.</p> <h2 style="font-size:16px;">Tottenham say win is a statement</h2> <p>For Mauricio Pochettino, this was a statement of intent at a venue where Spurs had lost 21 of their previous 26 games.</p> <p>“It is a massive victory for us and I am very proud of the performance. It is difficult to beat Manchester United at Old Trafford. They were better in the first half but we dominated from then on and the clean sheet was a bonus,” said the Argentine.</p> <p>“It’s massive, just what we needed,” Harry Kane told Tottenham’s website here. “We wanted to put a statement out there.’‘</p> <p>“We took our chances and coming here to Old Trafford and winning 3-0 is a big, big result.”</p> <p>Tottenham’s victory was their first at United since 2014. Their next league game is on Sunday at Watford, who have also won their opening three games.</p>

We worked all week and from the tactical point of view we didn’t lose, but we lost the game.