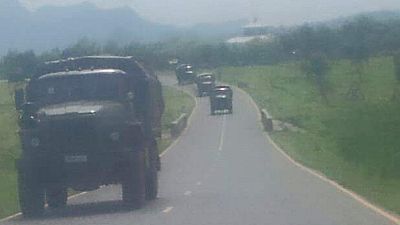 The Ethiopian government has officially spoken to reports about alleged withdrawal of its troops from the frontline with neighbouring Eritrea.

Some media reports late last week said Ethiopian troops were seen leaving the town of Shiraro, a key front in the Ethio-Eritrea war, the town is close to the town of Badme, a central contention of the war.

But Defense Minister, Motumma Mekassa in an interview on Saturday with the Reporter newspaper said the movement of troops was a “normal routine for the military and nothing else.”

He added that: “there are no formal agreements between the two countries as far as withdrawing of troops is concerned.”

This is the second time the issue of troop withdrawal from the front lines have surfaced since leaders of the two countries signed a peace deal in Asmara in early July.

Reuters news agency citing local media in Eritrea reported that troops of the country had began withdrawing from the disputed area which have since the end of the war been highly militarized.

The Ethio-Eritrea peace deal followed a decision by Prime Minister Abiy Ahmed to accept and implement a border ruling in relation to disputed territories between the two countries.

Abiy traveled to Asmara in July for talks that led to the cessation of hostilities between the two nations. It also marked the restoration of all diplomatic and trade ties between them.

Telephone lines have been restored, both sides have named ambassadors even though Ethiopia is yet to reopen its embassy in Asmara. The respective national airlines have began operations after two decades and families have since been united.

The withdrawal of troops and the subsequent demilitarization of the disputed territories is one of the eagerly awaited legs of the normalization of ties.