Demotions and clashes over Riparian land rage on in Kenyan capital 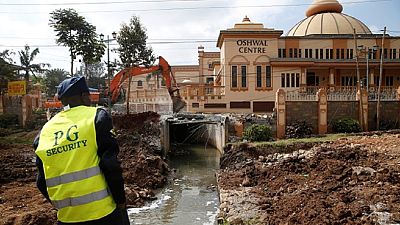 The Kenyan government campaign to protect the Nairobi river which has been besieged by the construction of buildings has been met with applause and resistance from different sections of the population.

For years, several structures were erected dangerously close to the river’s banks, bringing pollution, blockages and floods to the waterway that runs through the capital.

The government is taking bulldozers to the problem, in a demolition campaign begun this month that has levelled shopping malls, a petrol station and a coffee shop in Nairobi, to the horror of businesspeople who insist that official permits prove their buildings are legal.

If that land was given away it was done so in a way that was not legal, so that’s an area of corruption. The president has been very firm on his fight against graft. It has to start somewhere.

Permits to construct in riparian land are illegal

“It’s very clear that riparian (riverbank) land is land that is not supposed to have any buildings on it,” Dena told Reuters.

ALSO READ: Kenya’s president says not even his brother is immune from graft prosecution

“If that land was given away it was done so in a way that was not legal, so that’s an area of corruption. The president has been very firm on his fight against graft. It has to start somewhere.”

The effort is cheered by many in the city of more than 4 million, who have watched with dismay as apartment blocks, shopping malls and even swimming pools have popped up along the river.

“It’s good that the demolitions have picked up again and it’s a shame that it’s taken so long,” said veteran anti-corruption campaigner John Githongo, referring to unsuccessful past attempts to stop illicit construction.

The trouble, say Githongo and some of the businesses affected, is the haphazard nature of the demolitions, which they say come with little or no warning.

On Thursday evening street children scurried through the rubble next to a traffic circle while workers attempted to bring order to what resembled a bomb blast site. Steel rebar and metal sheeting jutted into the air through piles of debris.

A man whose shop was torn down one recent morning argued business owners should be given notice when the government declared existing permits invalid.

“You don’t just turn up with a bloody bulldozer,” he said. “On what legal basis is this happening?”

Will campaign scare away investors?

In a statement, the Law Society of Kenya said: “Our environment and planning laws have evolved over time and in some instances, developments have predated the law. The state should ensure that the application of the current law does not result in unlawful deprivation of private property.”

It is unclear how many buildings are at risk of being demolished.

The National Construction Agency said in a statement in March that nationwide 2,028 buildings, some of them on riverbanks, had been classified as unsafe.

Kenyan media this month said there was a list of 4,000 unsafe buildings in Nairobi earmarked for demolition by a committee appointed by the president. Dena, his spokeswoman, said she could not speak about specifics.

A wall of a 12-acre temple complex built close to the river by the Visa Oshwal Community of Kenya was knocked down last weekend. “We got all the necessary approvals that were needed at the time,” said Jinit Shah, vice chairman of the religious group.

“Investors out there might be running scared now that the approvals granted by government bodies within Kenya are not now valid.”

Nearby, the Ukay shopping centre – which contained a supermarket, restaurants, pharmacies and other shops – was simultaneously felled.

A week earlier, the centre’s owners had been invited before the national assembly’s committee on environment and natural resources to present their building permits amid the committee’s inquiry into encroachment onto riparian land across Kenya.

The lawmakers unanimously assured them that their documents were in order, so it was a shock when cranes arrived just after 5 a.m. and began the demolition, said someone involved who spoke on condition of anonymity.

Kiambu governor Ferdinand Waititu says he does not support the ongoing demolitions of structures built on riparian land in Nairobi. pic.twitter.com/IylnZqxBI0

In the same world ?

Where did humanity got wrong? Was it after Noah built the ark? ?

Do not call a corrupt man a hard worker. Corruption is simply stealing taxpayers money and building structures on riparian land, road reserves and grabbed land, THAT IS NOT HARD WORK.
such a person doesn't deserve your vote. SIJATAJA MTU ?

Senator's residence on riparian land to be demolished: Kakamega Senator Cleophas Malala could lose his home that is said to be built on riparian reserve in Milimani estate. https://t.co/oBMrlBtwyz