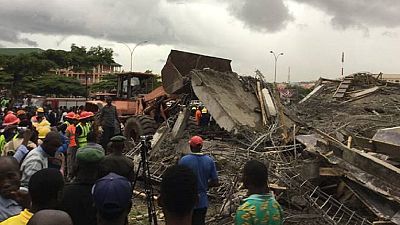 Nigeria’s acting president Prof. Yemi Osinbajo, on Friday evening visited the site of a construction accident which claimed a life according to local media portals.

The president sent condolences to the family that lost a relation and also thanks rescue services for their swift intervention after the incident. Authorities have yet to ascertain the cause of the accident.

Excavators quickly moved to the site after the incident was reported and a number of people trapped under the rubble have since been rescued.

“Thank you to officials of the FCT Fire Service and NEMA for conducting rescue operations quickly. Your actions saved lives today, thank you so very much,” Osinbajo said in a tweet.

Osinbajo was accompanied by high-level government officials including Secretary General of the federation Boss Mustapha and Minister for the Federal Capital territory.

This evening, I visited the site of the building that collapsed in Abuja.

My heart goes out to the family that lost someone today. There are no words to describe how you must be feeling.

On behalf of this nation, please accept our sincere condolences. pic.twitter.com/kLLEXf8SMw

Nigeria, Africa’s most populous nation, is no stranger to such incidents. Churches have collapsed killing congregants in the past. The main causes of these accidents have been put down to weak regulation and corruption as builders use inferior materials in their work.

Osinbajo is working in acting capacity for President Buhari who is on vacation in the united Kingdom. By law, a president notifies the national assembly of his delegation of executive powers when going on vacation.

Update : the search and rescue effort is still on going at the site of #collapsed buiding in Jabi, Abuja pic.twitter.com/0nyIqoUCu5