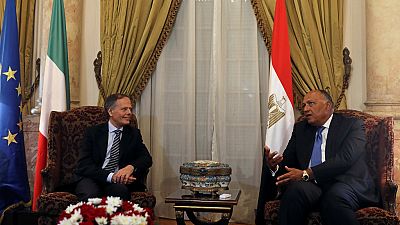 Italian Foreign Minister Enzo Moavero Milanesi on Sunday praised the “excellent cooperation” with Egypt over a probe into the 2016 murder of Italian student Giulio Regeni.

Milanesi expressed confidence in the ongoing investigation at a joint press conference with Egyptian Foreign Minister Sameh Shoukry in Cairo.

“We have also talked about the tragedy which affected the young Italian here in Egypt, Giulio Regeni, and I was pleased to hear from the minister, also from the Egyptian government, strong willingness to bring the judicial inquiry to concrete result. This is by the way the final goal of justice and we very much welcome the excellent cooperation which was established between the Italian judicial authorities and the Egyptian judicial authorities and we are confident that justice will be brought in this really tragic and painful case”, Milanesi said.

Regeni disappeared on January 25, 2016 while doing postgraduate research on Egyptian trade unions. His body was discovered on February 3 and Egyptian investigators found signs of extensive torture. Egyptian officials have denied any involvement.

Milanesi also remarked on a joint cooperation on migration, which has emerged at the centre of Italian politics after hundreds of thousands of migrants landed on Italy’s shores in recent years.

For his part Shoukry said that Egypt would support dialogue between Libyan political parties to reach a “Libyan solution” and to unify the country’s military.

“To prepare the continuation of the dialogue and the bilateral cooperation. Egypt’s role in Libya supports the political roadmap agreement within the United Nations framework and the efforts of the special envoy. Also, Egypt [supports] the continuation of the dialogue between all political parties in Libya to reach a Libyan solution. Egypt’s role in the current dialogue is to help unify the Libyan military which will result in their responsibility in defeating terrorism and preserving the unity of Libyan land”, the Egyptian Foreign Minister said.

Italy has told its allies it wants to hold an international conference on Libya, a neighbouring country of Egypt and one of the main migrant departure points, which will likely be in November.