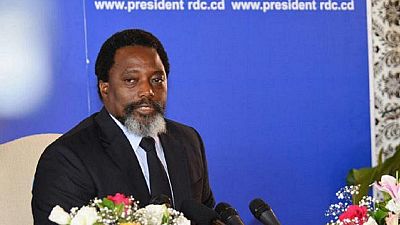 The president of the Democratic Republic of Congo (DRC), Joseph Kabila has embarked on a two day working visit to neighbouring Angola, the presidency of the latter said on Thursday.

Kabila, who is to be received by his Angolan counterpart, Joao Lourenco, has in the previously failed to honour appointments with the government in Luanda.

While the Congolese government is yet to divulge details of the meeting, according to Angolan newspaper Angop, the presidency says the meeting will focus on enhancing bilateral relations between the two Central African nations.

All we want is this agreement to be fulfilled, because we understand that failure to do so can lead to political and social turmoils that will not be very pleasant to the Congolese people and to the neighbors themselves including Angola.

DRC’s political crisis is likely to be discussed considering that Kabila’s neighbours including Angola and Rwanda have expressed concerns that lack of a credible transition could plunge the country into a civil war that could affect all nine neighbouring countries.

Kabila has been in power since 2001 and should have stepped down at the end of 2016 after he reached his two-term constitutional limit. However, a constitutional clause has allowed him to remain in office until his successor is elected.

The opposition has accused Kabila of plotting to illegally contest in the upcoming elections, which have attracted bids from former vice president Jean Pierre Bemba and tycoon Moise Katumbi.

The electoral commission is currently receiving applications from those interested in contesting the December 23 presidential elections. The period closes on the 8th of August.

In June, Angola’s president told our sister channel, Euronews that his government was talking regularly with Kabila as it monitors the political situation.

‘‘All we want is this agreement to be fulfilled, because we understand that failure to do so can lead to political and social turmoils that will not be very pleasant to the Congolese people and to the neighbors themselves including Angola,’‘ Lourenco said at the time.

The agreement signed on 31 December 2016 stipulated that Kabila leads a transition government, organises elections before the end of 2017, in which he is not a contestant and hands over power to his successor.

Elections have since been repeatedly postponed and Kabila is yet to declare that he will not seek another term in office.

Kinshasa in June protested profusely when the Angolan president met with Rwanda’s Paul Kagame and French president Emmanuel Macron in Paris to discuss the situation in Congo.