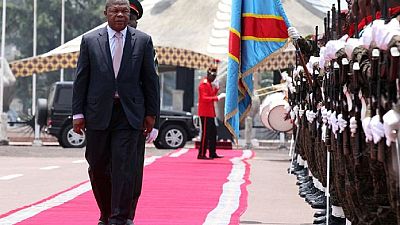 <p><strong>Angola’s president, Joao Lourenco has said his government is ‘talking regularly’ with the Congolese president, Joseph Kabila as it monitors the political situation in the restive country.</strong></p> <p>Lourenco, who was speaking exclusively to our sister channel, Euronews, said the talks with Kabila are advisory in nature and that its up to the Congolese president to ‘follow the advice or not’.</p> <p>‘‘All we want is this agreement to be fulfilled, because we understand that failure to do so can lead to political and social turmoils that will not be very pleasant to the Congolese people and to the neighbors themselves including Angola,’‘ Lourenco said.</p> <p>Kabila’s final term came to an end in 2016, but he has remained in office via a constitutional provision that allows him to stay until his successor is elected. The government has postponed elections several times, citing logistical challenges. The latest date set for elections to replace Kabila is December 23, 2018.</p> <h3>Kabila keeps the country guessing</h3> <p>The opposition, working together with the powerful Catholic Church in the country has organised protests and demonstrations asking Kabila to declare that he will not seek re-election, but many of these protests have been met with repression by the country’s security agencies.</p> <p>Two weeks ago, Lourenco met with Rwanda’s president, Paul Kagame and French president Emmanuel Macron to discuss the situation in Congo. Authorities in Kinshasa <a href="http://www.africanews.com/2018/05/29/dr-congo-demands-details-of-macron-meeting-with-rwanda-s-kagame/"target="_blank">protested</a> the meeting saying they would not accept any foreign led solution reached without their participation.</p> <p>Congo’s neighbours have in the past expressed fear that should Kabila insist on violating the constitution to seek another term, the chaos resulting from the political fallout could further destabilise the country and the region.</p> <p>The opposition has expressed concern over several actions of the ruling party including erection of Kabila billboards and posters across the country, and a promotional video released a week ago highlighting the achievements of Kabila’s presidency.</p> <h3>An intervention by <span class="caps">DRC</span>’s neighbours?</h3> <p>Asked whether Angola and its partners would intervene in case Kabila violates the agreement and Congo is plunged into great instability, Lourenco said ‘any intervention would be made in the interest of stability for all’.</p> <p>In the past, political turmoil in the vast nation has drawn in up to 9 countries including Uganda, Rwanda and Angola.</p>