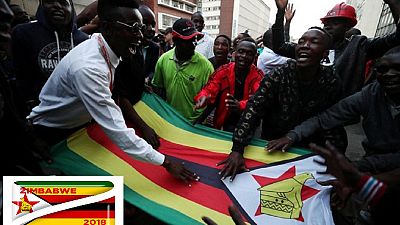 Zimbabwe’s ruling party since 1980, Zanu-PF, won an absolute majority of seats in the National Assembly in Monday’s parliamentary elections, according to official partial results announced Wednesday.

Out of 153 constituencies whose results have been compiled, “Zanu-PF gets 110 seats, while the MDC (Movement for Democratic Change) gets 41 seats,” announced the state broadcaster ZBC, citing the results of the election commission.

The National Assembly has a total of 210 seats. The Zanu-PF is therefore already guaranteed an absolute majority in the lower house.

Zanu-PF gets 110 seats, while the MDC (Movement for Democratic Change) gets 41 seats.

None of the parties reacted immediately to these results.

But the day before, the MDC had claimed victory in Monday’s general election.

“We have received the results from our agents (…). The results show beyond any reasonable doubt that we won the elections and that Zimbabwe’s next president is Nelson Chamisa”, the MDC leader, said a senior party official, Tendai Biti.

For his part President Emmerson Mnangagwa, boss of the Zanu-PF and presidential candidate, had said, confident in victory.

“The information obtained by my representatives on the ground is extremely positive,” he said on Tuesday.

Voters turned out en masse on Monday for the first post-Mugabe general elections.