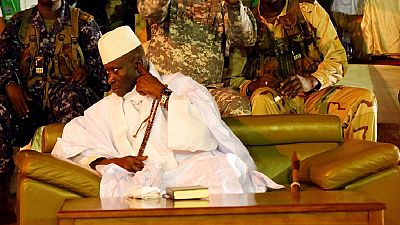 Former Gambian president Yahya Jammeh has lost his mother, Hajia Asombi Bojang. She died on Saturday (July 28) in Equatorial Guinea where her son is in exile.

According to local media portals, she has since 2017 been in Mongomo with her son after he left power having lost December 2016 presidential polls.

The government of Adama Barrow has since reacted to the news sending condolences to the family and the former leader. Jammeh led the tiny west African nation for over two decades.

#BREAKING: Asombi #Bojang, mother of #Gambia's former President Yahya #Jammeh dies in #EquatorialGuinea today. She has since 2017 been in #Mongomo with her exiled son and former dictator. pic.twitter.com/gWokPNKQkA

“Following news of the demise of Aja Asombi Bojang, mother of former President, Yahya Jammeh, His Excellency Adama Barrow on behalf of the people of the Republic of The Gambia, the first family and on his own behalf expresses his condolences to the former Head of State and his family,” the presidency said in a statement.

The statement added that: “President Barrow prays for Allah to grant her eternal peace.” There is no news of whether she will be sent back to The Gambia for burial – according to Islamic tradition, she must be buried shortly after death.

Jammeh is barred from returning home any time soon. A recent tape on social media, however, disclosed that the former leader had plans to return to The Gambia. That view has been condemned by the government.

Jammeh left the country along with other top generals of his regime in january 2017 after his tenure ended with the swearing-in of Adama Barrow – then leader of an opposition coalition – in the Senegalese capital, Dakar.

Conditions were not favourable at home as Jammeh refused to leave power, ECOWAS leaders flew with Barrow to Senegal for a summit and he was sworn-in at Gambia’s Embassy in Dakar.

Jammeh later agreed to leave the country to avert bloodshed. He had wanted a rerun of the presidential polls, which consition was rejected by ECOWAS leaders. A regional force was in place to oust in if he had refused to quit.