You have been warned: Sierra Leone police tells media 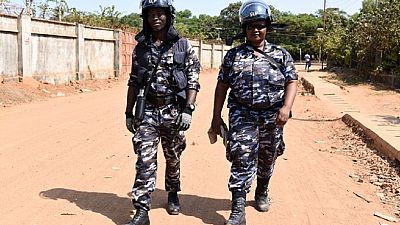 Sierra Leone police has warned journalists and media organisations against broadcast of ‘misleading, disrespectful and inciting’ statements, which it says have the potential to cause insecurity, instability and fear in the minds of the people.

In a statement issued over the weekend, the police force specifically called out FM 98.1 and AYV television for broadcasts that it says were made against President Julius Maada Bio’s executive orders, the governance transition team report and the controversial of the fuel subsidy that caused the first demonstration in Bio’s presidency.

‘‘In as much as people have the right to discuss issues, yet this should be done within the confines of the law and should be done responsibly and factually,’‘ read part of the statement.

In as much as people have the right to discuss issues, yet this should be done within the confines of the law and should be done responsibly and factually.

Bio who campaigned on promises to tackle graft and revive an economy devastated by a slump in commodity prices, has called out the former government for plundering state resources, describing the level of corruption as ‘a matter of national security’.

A presidential commission report released early this month said corruption and economic mismanagement under Koroma had left Sierra Leone’s economy on the brink of collapse, with external debt equal to almost half of gross domestic product.

Two weeks ago, the Sierra Leone government removed a fuel subsidy and effectively increased fuel prices from LE 6,000 ($0.75) to LE 8,000 ($1) for petrol, diesel and kerosene, a decision that was protested by sections of the population including civil society organisations.

Freetown police arrested the leader of a demonstration against the fuel price hikes and dispersed the group of protesters he was leading.

Amnesty International has also called out Bio’s government for failing to restore the right to demonstrate peacefully and to prosecute police officers responsible for the deaths of demonstrators under the previous regime.