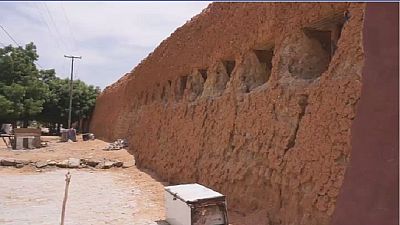 The remains of the fortified walls of Kano, the largest city in northern Nigeria, are more threatened than ever with destruction, due to local policies that pay little attention to heritage preservation and the population explosion in this congested locality.

A unique heritage, these 11th century red earth walls once helped to make Kano a safe and prosperous city-state, at the crossroads of several trans-Saharan caravan routes.

Mustapha Bachaka, curator of the Kano Museum observes that “almost 80% of it (the wall) has now been destroyed.”

If you look at the city wall generally, almost 80% of it has now been destroyed.

The local archives indicate that the original walls, 12 metres thick at the base, were 15 metres high, towered over by a wide walkway to watch the surroundings.

“If there was no city wall a long time ago, there would have been no Kano by now. The city wall is what the people of the time used to defend themselves or to protect themselves,’‘ said Bachaka

Despite a common culture, language and traditions, rivalries and wars of conquest have continued to oppose the pre-colonial Hausa states, which extend over much of present-day northern Nigeria. Bachaka says the wars are “just for territorial expansion” and that is why the walls are important.

In 2007, the National Commission of Museums and Monuments, responsible for preserving the Emir of Kano’s palace, requested the UNESCO World Heritage classification of the city’s fortified walls, palace and other historic sites.

But 11 years later, the request has still not been granted and historians fear that the incessant damage to the fortifications could further jeopardize possible recognition by UNESCO.