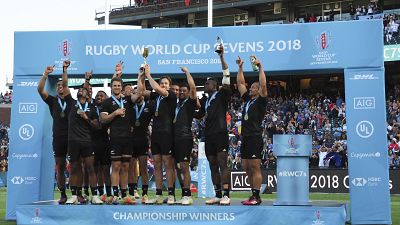 New Zealand created history at AT&T Park on Sunday with their 33-12 victory over England making them not only the first nation to win back-to-back Rugby World Cup Sevens titles but also the first to lift the Melrose Cup on three occasions.

The victory also ensured that just as in Moscow five years ago, New Zealand completed the double with the Black Ferns Sevens having won the women’s crown on Saturday evening in San Francisco.

The men’s Championship final was a repeat of the 2013 title decider, albeit played in completely different conditions with AT&T Park bathed in sunshine rather than the aftermath of an incredible electrical storm in the Russian capital.

The outcome was ultimately the same with New Zealand matching their tally of 33 points from that day and one of their players scoring a brace with Sione Molia repeating what Tim Mikkelson had done five years ago.

Molia had given the All Blacks Sevens the dream start after shrugging off England captain Tom Mitchell’s tackle to race under the posts inside the first minute. His second came from much closer range, Molia simply reaching over the line from a breakdown on the England line.

Dan Norton, one of four survivors from England’s loss in Moscow in their 2018 squad, gave England hope when he broke on the stroke of half-time and enabled Mike Ellery to run round under the posts to make it 14-7 at the break.

New Zealand lost Molia to a head injury assessment at half-time, but they edged further ahead when Joe Ravouvou scored his sixth try of the tournament – enough to share the HSBC Top Try Scorer award with South Africa flyer Siviwe Soyizwapi. Ruaridh McConnochie hit back instantly for England after good work by Ollie Lindsay-Hague and TUDOR Breakthrough Player of the Tournament Harry Glover.