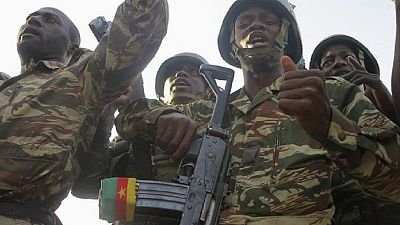 Four soldiers and a reporter were also injured in Thursday’s attack, other sources said, while the journalist said the convoy was ambushed again just a short time later.

News of the brazen assault came as the country’s 85-year-old president Paul Biya, who has ordered a crackdown in the troubled region, declared Friday he would bid for a seventh consecutive term in office.

Journalist Gregoire Djarmaila, who writes for the state daily the Cameroon Tribune and was injured by flying glass, said the attack occurred as Beti Assomo was heading for a visit to a military position seven kilometres (about four miles) from the town of Kumba.

The convoy comprised about 30 vehicles, including an armour-plated vehicle that was carrying the minister and six generals, he said.

It encountered a roadblock about halfway along the route, “and our vehicles were riddled by gunfire, coming from houses that been abandoned because of the war,” Djarmaila said.

The military escort returned fire, enabling the convoy to reach the military post.

“But no sooner had we left the post than we were attacked again. This time, they looked more numerous and determined… (they fired) on all the vehicles in the convoy.”

Djarmaila said that “our good luck was that they were using home-made hunting guns” rather than military weapons, adding that he experienced “40 minutes of hell.”

The ambush occurred in the heartland of an armed campaign to gain independence for the Northwest and Southwest Regions, a predominantly English-speaking part of the French-speaking West African state.

Years of resentment at perceived discrimination at the hands of the francophone majority fuelled demands in 2016 for a return to the country’s federal structure.

Biya took a hard line, ruling out any concessions.

As the situation polarised, anglophone militants last October 1 made a symbolic declaration of independence.

They named Buea, the main town of Southwest Region which lies close to Kumba, as the capital of their purported state, Ambazonia. It has no international recognition.

A government crackdown then followed, plunging the two regions into almost daily acts of violence and retribution that have claimed scores of lives and forced tens of thousands from their homes.

The presence of a large English-speaking minority in Cameroon dates back to the colonial period.

The former German colony was divided between Britain and France after World War I.

The French colony gained independence in 1960, becoming Cameroon. The following year, the British-ruled Southern Cameroons were amalgamated into it, giving rise to the Northwest and Southwest regions.

Casualties of the crisis

According to a government report last month, anglophone separatists have killed 74 soldiers and seven police since late 2017 while more than 100 civilians had died “over the past 12 months.”

The toll has risen sharply since then. Since the start of this week alone, at least three policeman, including a superintendent, have been killed, and fighting erupted for several hours in Buea itself.

UN says 160,000 people have been internally displaced and 20,000 have sought refuge in neighbouring Nigeria.