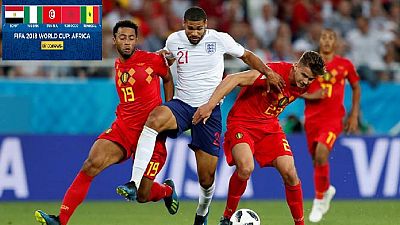 Belgium and England have already met during the World Cup in a match both teams seemed reluctant to win and on Saturday they will face each other again in a game they both seem reluctant to play.

The two sides must pick themselves up and dust themselves down after suffering the crushing disappointment of semi-final defeats to play for the modest prize of third place in a fixture often criticised as pointless.

“It’s not a game any team wants to play,” said England manager Gareth Southgate after his team lost 2-1 to Croatia after extra time in Wednesday’s second semi-final.

Of course, we want to win, we’ll be ready to go again because the team take great pride in their performances. It’s a bit too early after that defeat to think about it.

“Of course, we want to win, we’ll be ready to go again because the team take great pride in their performances. It’s a bit too early after that defeat to think about it.”

His Belgian counterpart Roberto Martinez was similarly unenthused about the game after his side were beaten 1-0 by France on Tuesday.

“It’s a difficult emotion to manage. You’re disappointed because you lose the semi-final, and it’s very difficult to see the opportunity of playing another game as a positive,” he said.

Even so, he said he would try to lift his team.

“We need to regroup and recover and see the opportunity. To try to finish third in the World Cup doesn’t happen often. The only time it happened in Belgian football was in 1986, when we finished fourth.”

Belgium vs England at group stage

The two teams previously met in their final group stage game when both had already guaranteed a place in the last 16, with the twist that the side who finished second would land in the easier side of the draw.

Martinez switched nine players and Southgate brought in eight, a decision he described as a ‘no brainer’ in the circumstances.

Belgium won 1-0 and were rewarded with games against Japan, Brazil and France while England played Colombia, Sweden and Croatia but the end result for both sides was the same — semi-final elimination.

“Sometimes I think you have to look at the bigger picture and make decisions that might be criticised,” said Southgate at the time.

The third-place match was dropped from the European championship by UEFA following the 1980 tournament but has remained part of the World Cup calendar despite complaints. FIFA did not immediately respond to a request for comment.

Both teams are in their second third-place match, Belgium having lost to France in 1986 and England to Italy four years later.