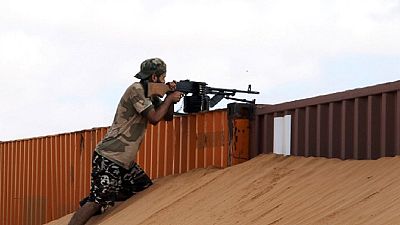 “An armed attack was carried out by terrorist groups on the Tazirbu site causing havoc, looting, killing and terrorising families, children and the workers who ensure the supply of water to cities,” said a statement from the Great Man-made River Project, a pipe network supplying ground water from the Libyan Sahara.

An engineer and a guard were shot dead and two guards were kidnapped in the raid, which the statement said bore the hallmarks of an attack by Islamic State militants. The assailants also stole cars and supplies from the site, the statement added.

An armed attack was carried out by terrorist groups on the Tazirbu site causing havoc, looting, killing and terrorising families, children and the workers who ensure the supply of water to cities.

Libya’s oil output down to 315,000 bpd as exports blocked

On Friday, members of an unidentified armed group kidnapped three Filipinos and one Korean employed as technicians at the Al-Hassouna plant, part of the same water network connecting desert wells to towns and cities in northern Libya.

It published a picture of the two men standing handcuffed in orange jumpsuits, and said they had been taken to the east of the town of Waddan, in Libya’s central desert.

Officials from Haftar’s Libyan National Army said they could neither confirm nor deny the report.

Militants linked to al Qaeda and Islamic State have carried out operations across Libya. Islamic State lost its coastal stronghold of Sirte to local forces backed by U.S. air strikes in 2016, and in recent months militants have been most active in remote desert areas.