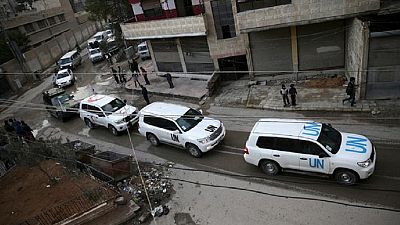 One person was killed when unidentified gunmen attacked a convoy of humanitarian trucks belonging to a contractor of U.N. children’s agency UNICEF north of South Sudan’s capital Juba on Wednesday, according to the agency.

Africa’s youngest nation has been gripped for nearly five years by a conflict triggered by a political disagreement between President Salva Kiir and his former deputy Riek Machar.

“We have received reports that two trucks belonging to a UNICEF contractor were assaulted by armed men,” UNICEF said in a statement to Reuters, adding one person, an assistant driver, was killed in the attack near Mangalla town.

We have received reports that two trucks belonging to a UNICEF contractor were assaulted by armed men.

The agency said it was still trying to verify the name and nationality of the victim but condemned “this senseless attack directed against unarmed civilians working to deliver humanitarian supplies to those in need.”

Elario Paul Fataki, a local government official in the area where the attack occurred, told Reuters the assault occurred about five km (three miles) from the town of Mangalla.

Attacks on humanitarian convoys and personnel have been frequent in South Sudan’s conflict and both warring sides have been blamed. At least 100 charity workers have been killed in the country since the war started in December 2013.