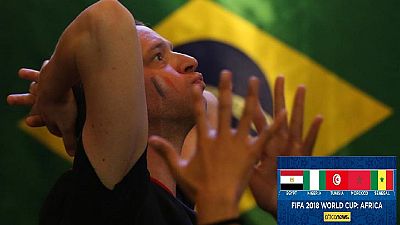 Up next is the Round of 16 clash between Belgium and Japan.

Brazil are through to the quarter finals after Roberto Firmino confirmed the win with a goal in the 88th minute.

This will be a great opportunity for Mexican football to face the best team on the planet and we will have to play to our full potential.

Second-half goals from neymarjr and Roberto Firmino mean that CBF_Futebol are through to the quarter-finals! #BRAMEX pic.twitter.com/LHBtM2Ajbw

Brazil takes the lead after a Neymar Jr goal in the 51st minute.

The line-ups are out, the teams are set to play for a place in the quarter finals.

The teams are in for #BRAMEX! #WorldCup

Five time world champions Brazil will take to the pitch today, in the round of 16 clash with Mexico, while Japan who earned their place in the knockout stage of the World Cup at the expense of Senegal take on Belgium.

Brazil will be wary of the Mexican team that stunned defending champions Germany, 1-0 in their opening game at the World Cup.Coach Tite’s men will also be anxious to avoid the fate that has befallen fellow football bigwigs including Germany, Argentina and Spain who have all been eliminated from this year’s tournament in dramatic fashion.

Belgium, who are tournament favorites, will take on a Japan side that has defied odds at this year’s World Cup, defeating Colombia 2-1, in their opening game, before qualifying thanks to the fairplay rule despite their 0-1 loss to Poland in the final group game.

Mexico boss Juan Carlos Osorio believes the way to take on Brazil, whom he labelled the “best team in the world”, in the last 16 of the World Cup is for his side to adhere to their attacking philosophy.

Mexico will be looking to replicate the performance that saw them defeat holders Germany in the group stage. But in Brazil, they face a team with an enviable attacking arsenal that includes Neymar, Philippe Coutinho, Thiago Silva and Gabriel Jesus.

“This will be a great opportunity for Mexican football to face the best team on the planet and we will have to play to our full potential,” Osorio told reporters on Sunday.

“I think that defending with an odd number of defenders and wing backs is an option but our footballing style has to do more with creating defensive problems in the opposition line,” he said.

Japan coach Akira Nishino hopes his gamble of resting players in their previous game against Poland will bear fruit on Monday against Belgium when his side will be bidding to make it third time lucky and reach the quarter-finals.

Nishino risked his side exiting the competition by making a remarkable six changes from his line-up from the 2-2 draw with Senegal for their final Group H match against Poland which they lost 1-0, sneaking through due only to their superior disciplinary record over Senegal.

“We have been here twice in the past in round of 16 but this is different, we haven’t exhausted ourselves yet so we can create a new opportunity,” Nishino told a news conference on Sunday.

Nishino stressed the importance of having fresher legs when they come up against the highly fancied Belgians, referencing his nation’s two previous last-16 exits in the World Cup to Turkey in 2002 and Paraguay in 2010, when they lost 1-0 and on penalties respectively.

“In those games our players were exhausted, they had nothing left, they had left everything in the group stage. This is our third time in the last 16 and we have been very tactical in our approach,” Nishino said.

“When you are in the World Cup it’s about achieving your aim so it’s not something to criticise; the opposite. I think it shows that Japan are really competitive and try to do whatever it takes to win,” he said.