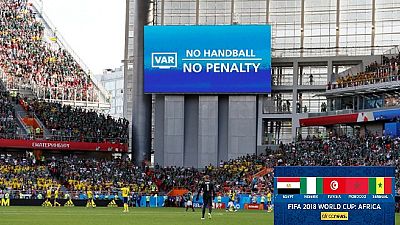 The group stage of the World Cup came to an end on Thursday, and up to 16 teams have left Russia following their elimination from football’s biggest tournament.

While the biggest story of the tournament for Africa is the elimination of all five representatives at the group stage for the first time since 1982, there were many more attention grabbing headlines produced in Russia including the shock elimination of defending champions Germany.

‘African football has suffered a big step back’, were the words of Ivory Coast football legend Didier Drogba after the dramatic elimination of Senegal, Africa’s last representative at the World Cup on Thursday, through FIFA’s fair play rule.

We have always said that VAR doesn't mean perfection - there could still be the wrong interpretation or a mistake - but I think you would agree that 99.3% is very close to perfection.

Egypt, Tunisia and Morocco had all been eliminated after two consecutive losses while Nigeria’s Super Eagles were eliminated on Monday by Argentina after they had revived their chances with a 2-0 win over Iceland in their second game.

“Africa is going to be successful one day but we need to think again how we approach these big competitions,” said former Ivory Coast striker Drogba.

Indeed, many stakeholders in Africa’s football system including players, coaches and officials will look back on Russia and strategise on how to perform better at the next opportunity.

Both Senegal’s coach, Aliou Cisse and Tunisia coach Nabil Maaloul, said their teams were simply not good enough to progress to the next level, while Nigeria’s Gernot Rohr believes his team has laid a good foundation to come back stronger at the next World Cup in 2022.

The curse of the defending champions

Holders Germany were eliminated on Wednesday, following a 0-2 defeat by South Korea. The defending champions who were eliminated at the group stage for the first time since 1938, had lost the opening game in Russia 0-1 to Mexico, before scoring in stoppage time to win 2-1 against Sweden.

The four time world champions will be asking tough questions of themselves, and coach Joachim Low, who has been in charge since 2006 may have to ponder his future. Following the World Cup exit, Low however insisted that ‘this is not a dark time in German football’.

“I think we have young players who are very talented, and some have the potential to go forward. This has happened to other nations before, we just have to draw the right conclusions and make it better going forward,” Low said.

Germany are the fourth defending champions to be eliminated from the group Stage at the World Cup in the last five tournaments.

The use of Video assistant referees (VARs) at this year’s World Cup, which is a first for the new technology at the world’s biggest football tournament, has been a major feature of debate throughout the group matches.

During the referee media conference after the group stage, it was revealed that up to 335 incidents were checked using VAR, nearly seven per game, with 14 on-field reviews made by referees and three reviews made by the VAR team on factual decisions.

7 out of 24 penalties at the group stage were awarded by VAR, while the system is credited with improving the accuracy of match changing decisions by referees from 95% to 99.3%.

“We have always said that VAR doesn’t mean perfection – there could still be the wrong interpretation or a mistake – but I think you would agree that 99.3% is very close to perfection,” said Chairman of the FIFA Referees’ Committee Pierluigi Collina.

Teams in Russia have been more determined to score, with defences struggling to keep clean sheets. Up to 37 games were played in Russia before the goalless stalemate between Denmark and France ended the longest streak of ‘No 0-0 scoreline’ at the World Cup.

It’s also been a tournament of late goals, as can be testified by several African sides including Morocco, Egypt, Tunisia and Nigeria conceding crucial late goals in their group matches. 27 out of 122 goals scored in this year’s group stage matches were scored in the last 10 minutes, a remarkable 22%.

Lionel Messi, who missed a penalty in Argentina’s opening game against Iceland, scored the 2018 World Cup’s 100th goal in the game against Nigeria, which his side went on to win 2-1.