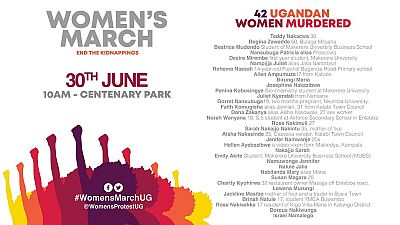 Uganda’s police seem to have avoided a potential showdown with women activists, after the country’s internal affairs ministry approved Saturday’s demonstration to protest the ineffective response to the kidnap, sexual abuse and murder of over 30 women in the past one year.

The inspector general of Police (IGP), Martin Okoth Ochola had earlier denied the activists the required permission to demonstrate, arguing that the issues of insecurity had been adequately addressed in public fora by the country’s president, Yoweri Museveni and different security agencies.

But as more and more people vowed to take part in the demonstration to highlight the plight of women, the ministry of internal affairs which supervises the police and other security agencies intervened.

The march is on and together we shall overcome violence against women and children.

Yesterday, WomensProtestUG
delivered a letter to the Min of Internal of Affairs Hon Jejje Odong. We were petitioning PoliceUg decision to deny us our right to a peaceful demonstration.We'll be speaking about the Minister's response at today's press conference. #WomensMarchUG pic.twitter.com/ortv8BNCq6

Asan Kasingye, a high ranking Assistant Inspector General of Police tweeted that he would personally participate in the #WomensMarchUG.

‘‘I will be there. The march is on and together we shall overcome violence against women and children’‘ read Kasingye’s tweet.

I will be there Sarah. The march is on and together we shall overcome violence against women and children. https://t.co/kV0ch5JVsm

Excited to announce that Police has finally come on board to support our our NON- VIOLENT & NON- PARTISAN #WomenMarchUG tomorrow. A special thank you to AKasingye for all your help. We start marching at 10:00 am from outside Centenary Park. pic.twitter.com/OmRyBO1PEG

We commend PoliceUg & KCCAUG for committing to facilitate the #WomensMarchUG for citizens to publicly demand for investigations into the brutal murder of over 42 women to end #impunity for killings. This should be the norm rather than the exception. Peaceful protest is a right. pic.twitter.com/cugadTaWOF

The Women’s Protest Working Group who are organising the demonstration describe themselves as a non-partisan movement of citizens who ‘plan, strategize, organise, conduct and account for non-violent protest actions against oppression in Uganda’.

The issues raised by women activists

Some of the issues they raised in an earlier protest seeking audience with the IGP include:

At the height of the kidnapping and killing of women, the president of Uganda, Yoweri Museveni proposed that palm prints and DNA records of all Ugandans should be captured to facilitate the police in apprehending criminals.

And so I March. To remember them, they were not given any justice and no one was held accountable for their gruesome deaths. But I recognize them. I think about them, the families and friends they left behind with no closure, but fear and anger. #WomensMarchUG pic.twitter.com/r3ZQc6zXhW

I have been to the murder crime scenes of atleast 13 women, I have seen the gruesome nature their lives have been ended. It's inhuman to only offer hope and prayers. Action must be taken.

Like kalinaki I will join the #WomensMarchUG not as a reporter but as a citizen.

I ask all Ugandans to refuse to be intimidated and show up in big numbers for the #WomensMarchUG on Saturday, 30 June as we demand that both Police and government protect the lives of all Ugandans and demand justice for all the victims whose lives have ended tragically pic.twitter.com/i8koMu7Eqf