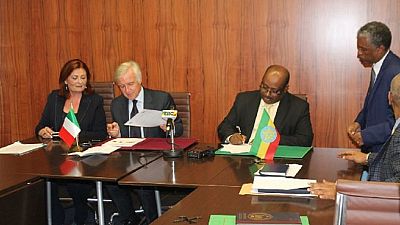 Ethiopia and Italy have signed a €30 million loan agreement aimed at supporting the implementation of Inclusive and Sustainable Development of Agricultural Value Chain project in Oromia and Southern Nation, Nationalities and Peoples Region (SNNPR).

The agreement is part of the 2017-2019 Ethio-Italy Framework signed in September 15, 2017 that contributes to agro-industrial development and the creation of enabling environment to establish integrated agro industrial parks in the two regions.

It also used to develop inclusive and sustainable agricultural value chains of wheat and industrial tomato in Oromia, and avocado and pineapple in SNNPR.

The agreement was signed by State Minister of Finance and Economic Cooperation (MoFEC), Admasu Nebebe and Italian Ambassador to Ethiopia, Arturo Luzzi.

According to the State Minister, the loan is interest free and highly concessional with the grant element of 80 percent.

The scientific and technical cooperation signed on 5 April 1973 laid the basis for the recent development cooperation which is becoming critical part of their partnership, Admasu said.

Italian Ambassador to Ethiopia, Arturo Luzzi on his part said that Ethiopia has always been Italy’s priority and strategic partner in Africa.

In addition to the €30 million loan agreement, Italy will provide €22 million loan next year for industrial parks development.