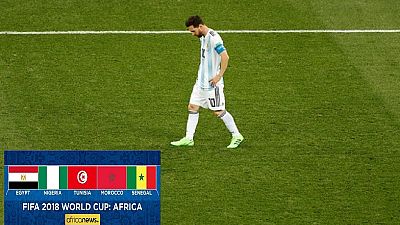 Classy Croatia handed Argentina a 3-0 drubbing to claim a place in the World Cup knockout stage thanks to goals by Ante Rebic, Luka Modric and Ivan Rakitic in their Group D match on Thursday.

Argentina’s woes began when Caballero picked up a backpass and inexplicably lobbed it towards Rebic, who twisted in the air to whack in a volley in the 53rd minute.

Real Madrid star, who was later named Man of the Match, Luka Modric then unleashed a superb strike from outside the area to double the lead for the Balkan side 10 minutes from time, with Rakitic putting the icing on the cake in added time.

Simply incredible from #CRO as they seal their place in the knock-out stages with a historic victory!

The burden of pressure weighed heavily on Argentina as they battled to get into the contest, throwing on three attacking substitutes after conceding the first goal but allowing their frustrations to boil over as they failed to make any impact.

Lionel Messi, facing yet another failure at international level, had little influence on the game as Argentina created one chance in the second half when Maximiliano Meza had a 64th minute effort stopped on the line by keeper Danijel Subasic.

Twice champions Argentina now face a struggle to reach the last 16 even , after taking one point from their first two games.

Croatia’s second win in the group guarantees them a top two place while Argentina have one point and need to win their last group game against Nigeria in St Petersburg on Tuesday to boost their chances of advancing to the second round.

Nigeria, who play Iceland on Friday will be hoping to win and capitalise on the open nature of the group that was unofficially called the Group of Death at this year’s World Cup.