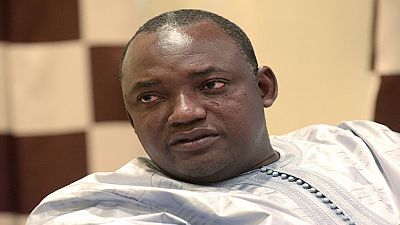 Gambia’s President Adama Barrow on Tuesday promised justice would be done after police killed two young protesters at an anti-pollution rally, vowing such an incident would not happen again.

Bakary Kujabi and Ismaila Bah were killed by police on Monday during a demonstration in the village of Faraba Banta against a sand excavation site protesters say is polluting the area’s rice fields.

Six civilians and 16 police officers were injured in the clashes, Gambia’s police said.

The father of one of the victims, Saidou Bah, demanded those who killed his 17-year-old son be brought to justice.

“The police officers that shot my son should be prosecuted by the authorities. They opened fire indiscriminately on the protestors. They killed my son deliberately. This gruesome act should not go unpunished,” he said.

President Barrow said on Twitter that the incident was “regrettable, unacceptable and never to be repeated”.

Posting a picture of himself visiting the injured in hospital, he added that “justice will prevail”.

Five police officers were suspended and detained over the incident, while six protesters were arrested, police said, adding that a police station and four other buildings were torched during the clashes.

Authorities called for calm and ordered an investigation, as well as suspending mining activities in the area until further notice.

There has been mounting tension between the villagers in Faraba Banta and police over the impact of sand excavation on the farmers’ land.

A protest at the end of May saw police use rubber bullets and tear gas to disperse demonstrators.