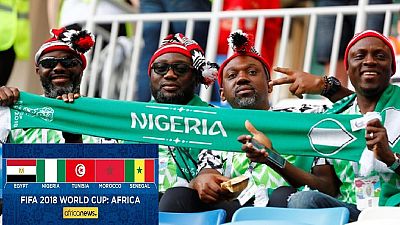 <p><strong>About 100 Nigerian soccer fans stranded in Kaliningrad following their team’s loss to Croatia in their World Cup opener were finally on the move on Monday after what was described as a visa gaffe.</strong></p> <p>Most of the supporters had planned to take the train from Kaliningrad back to Moscow following the Super Eagles 2-0 <a href="http://www.africanews.com/2018/06/17/world-cup-2018-nigeria-loses-to-croatia-2-0-but-nigerian-fans-remain-hopeful/"target="_blank">loss</a> on Saturday but did not have the necessary visas to pass through countries like Lithuania and Latvia.</p> <p>Russian officials stepped in to help the marooned fans by arranging flights but they were not free.</p> <h3>Nigerian fans cry foul over ‘expensive’ flights</h3> <p>Supporters said they were told flights would be found at the lowest possible fare but one fan told Reuters he was quoted a price of 28,000 Rubles ($442) which he declined to pay.</p> <p>Eventually, he arranged a ticket for 6,000 Rubles ($95) but would not be able to leave Kaliningrad until Monday evening.</p> <p>“I was not going to pay that for a flight that is one hour,” Babajide Oke, a Nigerian who lives and works in Atlanta, told Reuters as he stretched out on a row of seats in the concourse while other supporters in their national jerseys wandered about. “I got on my laptop and found my own ticket.</p> <p>“When I got to the train station they gave us the wrong information and they told us we should go to the airport and we can purchase tickets at a discounted rate,” he said.</p> <p>Many of those sitting around Oke said they had tickets but would not be able to leave until Tuesday evening.</p> <h3>Role of Russian authorities</h3> <p><span class="caps">TASS</span> News Agency, citing Andrei Yermak, Kaliningrad’s minister for culture and tourism, reported around 80 Nigerians were unable to leave by train.</p> <p>“Full support has been given to the Nigerian supporters who despite multiple warnings from <span class="caps">FIFA</span> and information alerts from the consulate, were not able to travel from Kaliningrad to Moscow on June 16,” Kaliningrad government press services said in a statement.</p> <p>“A large number of the Nigerians flew to the capital on June 18. Around 20 people already have plane tickets for the 19th.” </p> <h3><a href="http://www.africanews.com/2018/06/15/photos-russia-bans-lucky-chickens-as-nigeria-s-coach-says-team-is-physically/"target="_blank"><span class="caps">ALSO</span> <span class="caps">READ</span>: Russia bans ‘lucky’ chickens as Nigeria’s coach says team is ‘physically and mentally ready’</a></h3> <h3>Nigeria’s World Cup fortunes</h3> <p>Meanwhile, the Nigeria coach has said all hope is not lost ahead of his side’s Group D clash against Iceland.</p> <p>Gernot Rohr, who said his youthful side will learn from mistakes that saw them concede twice from set pieces ‘can do better’.</p> <p>“We have to accept this defeat and now we have to win against Iceland, all is possible still,” said Rohr. </p> <p>“When you lose a match it is something we don’t like but we recognise that Croatia had the better team tonight and my young players made some mistakes,” he added.</p> <p>Nigeria has an uphill task of qualifying from the group considering that they meet a solidly organised Iceland side that held two time world champions Argentina to a 1-1 draw in the opening game.</p>

Full support has been given to the Nigerian supporters who despite multiple warnings from FIFA and information alerts from the consulate, were not able to travel from Kaliningrad to Moscow on June 16.